Presentation of portraits of P. E. Strzelecki
to the National Portrait Gallery in Canberra.

On 6 March 2007, as a result of the Embassy's initiative and thanks to the support of the Ministry of Foreign Affairs of Poland, two reprints of woodcut portraits of Paweł Strzelecki, the distinguished traveller and explorer who contributed a great deal to Australia's development, were presented to the Director of the National Portrait Gallery, Mr Andrew Sayers, by the Ambassador of Poland H.E. Mr Jerzy Więcław.

The woodcuts were made in 1873 by Józef Holewiński, Franciszek Tegazzo and Konstanty Przymorski. The originals are part of the collection of the National Museum in Warsaw and the reprints are a gift from this museum.

The presentation ceremony included representatives of the Polish community, with members of the Strzelecki family among them.

During the ceremony the H. E. Ambassador Mr. Jerzy Więcław delivered a brief speech as follows:

Remarks by H. E. Mr. Jerzy Więcław
Ambassador of the Republic of Poland at the
National Portrait Gallery Canberra - 6 March 2007

The Polish - Australian historian called Sir Paul Edmund Strzelecki is the
„best known of all Poles who have contributed to Australia’s history”.
His name spelt in many different ways, pronounced in various different ways, Count Strzelecki towers high among those who in the first half of the nineteenth century explored, mapped and described the vast continent of Australia.

When he left the colony after four busy years, he left behind many friends among them Sir John Franklin, Governor of Tasmania, then Van Diemen’s Land, and Lady Jane.

He was one of the first to find gold in Australia during his first explorations in 1839. He was required by Governor General Sir George Gipps

„ … to keep the matter secret, as, from the penal condition of the colony in those times, the making known of such discovery might have been attended with serious consequences;
… the government of the colony warned him of the mischief that might arise in such times, and requested him very urgently not to make the discovery generally known”.

It is not my purpose to engage in the old dispute about to whom belongs the laurel of the discovery of gold in Australia, but by evoking this episode I simply wish to highlight one of the facets of the fascinating personality of Paul Edmund Strzelecki.

Born in 1797 at Głuszyna, near Poznan, in the old family of Strzelecki of Strzelce, whose documented roots go back to the fourteenth century, by a very circuitous route from Britain, via Northern and Southern America, Hawaii, Tahiti and New Zealand, Paul Edmund Strzelecki sailed to Sydney in April 1839.

Equipped with a solid knowledge of geology, geography and agricultural chemistry, with ten years’ experience in the Americas where he visited many gold and silver mines in Mexico and Chile, he embarked on an exploration of New South Wales.

For us Poles he is associated with ascending and naming the highest mountain of Australia - Mount Kosciuszko.
The opening up of Gippsland, a detailed exploration of Tasmania and finally northern NSW, had a tremendous economic impact on the development of the colony.
The names given by Strzelecki - Gippsland, La Trobe River, Barney Plains, Lake King, Mount Arrowsmith, Tasmania - are still there.

Strzelecki left Sydney in April 1843. In London he received a letter accompanied by a subscription of £400 from settlers and ladies of Tasmania. He used the money to publish his „Physical Description of New South Wales and Van Diemen Land”, which reached the bookshops’ discuss shelves in 1845. That year he was awarded a gold Founder’s Medal of the Geographical Society in London. Only two other explorers of Australia were awarded the same medal - Edward J. Eyre and Charles Sturt.

Charles Darwin congratulated Strzelecki on his „Physical Description” and wrote:

„ … I am astonished at the number of deep subjects which you discuss;
… I heartily wish that one quarter of English authors could think and write in language one half as spirited yet so simple”.

At the end of the chapter 7 of „Physical Description … ” devoted to Australian Aborigines explorer turned into the spokesman of the Aboriginal people of Australia.

While in Britain Paul Edmund Strzelecki did not lose touch with the colony and helped thousands of impoverished families to migrate to Australia. He also contributed in a very significant way to financing an expedition under the command of Captain McClintock to find the lost expedition of Sir John Franklin. In recognition of this contribution, Captain McClintock named a large bay of the Prince of Wales Island Strzelecki Harbour.

In June 1869 Strzelecki was awarded the Order of St. Michael and St. George for his
„years of exploration of Australia, the discovery of gold, the discovery of new territory accessible to colonization and for the construction of topographical and geological maps, based on astronomical observations”.

Strzelecki died in 1873 and was buried in Kensal Green Cemetery.

Bernard Cronin observed:
„Few men have led as full and varied a life as Count Strzelecki. His niche in Australian annals is secure for all time, for we are considerably in his debt”

„Strzelecki should be remembered not merely as an early discoverer of gold and silver, nor as the explorer who named Mount Kosciuszko and produced the first map of Gippsland, but as a man who had a great vision and concern for the future if Australia. He was the first man concerned with the Australian environment and ecology.
The first man who advocated „the most ambitious” plans for large-scale irrigation in New South Wales and Tasmania, who foretold a very bright future for the Australian wool industry, the man who first proposed and attempted to organize a vast and detailed geological survey of Australia. Strzelecki also must be accounted a pioneer of Australian meteorology ”. 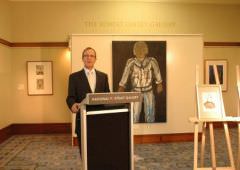 It gives me great pleasure to present today two portraits of Sir Paul Edmund Strzelecki to the prestigious National Portrait Gallery of Australia.
I ask the Director of the Gallery, Mr Andrew Sayers, to accept the reprints from „Kłosy” magazine of the year 1873 which were originally executed respectively by Józef Holewiński, and Franciszek Tegazzo with Konstanty Przymorski, and have been donated by the National Museum in Warsaw. 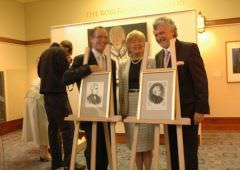 I hope that the thousands of visitors who are flocking each year to this accomplished and highly popular cultural establishment in Canberra will have a chance to familiarize themselves with a Pole who, in his own words, captured his feelings towards Australia and Australians in the following way:
„ … although in a foreign country on foreign ground, but among a free people who appreciate freedom and its votaries”.

I trust that after 167 years since these words were penned many of my compatriots who are visiting or living in Australia do share those sentiments, so eloquently expressed by Sir Paul Edmund.

We thank Embassy of Poland - Canberra for sending the text of the Ambassador's speech.