A commemorative tablet plaque on Mount Kosciusko, the summit of Australia, bears the following:

From the valley of the Murray River, the Polish explorer, Paul Edmund Strzelecki, ascended these Australian Alps on February 15, 1840.
A pinnacle, rocky and naked, predominant over several others, was chosen by Strzelecki for a point of trigonometrical survey.
The particular configuration of this eminence," he recorded, struck me so forcibly by the similarity it bears to a tumulus elevated in Krakow over the tomb of the patriot Kosciusko, that, although in a foreign country, on foreign ground, but amongst a free people, who appreciate freedom and its votaries, I could not refrain from giving it the name of Mount Kosciusko.

The plaque was unveiled on the correspondling date this year by the Polish Consul-General (M. de Noskowski).
The circumstances are recalled in a paper read by Mr. W. L. Havard, ex-President, at a recent meeting of the Royal Australian Historical Society, in Sydney. It is printed in the current number of the society's „Journal and Proceedings,” and is an informative record of the life of the scientist and explorer who spent much time in this colony and in the Newcastle district.

"The main object of Strzelecki's visit to New South Wales was to examine its mineralogy", Mr. Havard states.
How ever whlen he began his investigations he found the country offered such an in teresting geological field that he devoted himself to the study of the geology of New South Wales. Finding it necessary to prescribe for himself limits in such a vast territory, he confined himself ulti mately to country stretching 150 miles inland and extending from Port Stephens to the southern extremity of Tasmania.

Writing from Wallerawang on September 17, 1839, to a friend, Stuart Donaldson, Strzelecki indicates his intention the next day to leave for Bathurst, thence for the Goulburn and Hunter Rivers and Port Stephens. Whether or not he vis ited Port Stephens on this occasion is not known; he was there in 1843.
A letter quoted by Mr. Havard as having been sent by Sir John Franklin to his friend expresses the hope that he will receive a reply from Strzelecki from Port Stephens. The explorer left Launceston for a return visit to New South Wales in September 1842, by Boyd and Co.'s steamer Sea Horse.

„In December, Strzelecki was at Port Stephens, where in 1839, his friend, Phillip Parker King, had been appointed Commissioner of the Australian Agricultural Company with headquarters at 'Tahlee'”

„On December 20, from Port Stephens, he wrote to James McArthur of The Vineyard, Parramatta…
That Strzelecki made a geological examination of the Upper and Lower Hunter Valley is evident from the place names mentioned in „Physical Description.” He mentions a tract of country between Port Hunter, Port Stephens and Mount Wingen, naming such places as Dart Brook, Karua (Karuah) River, St. Patrick's Plains, Raymond Terrace, Raymond Ferry, Booral, Carrington, Strout (Stroud), Glendon, and Harper's Hill - all centres of geological interest.
He investigated the Newcastle portion of the coal basin. He noted coal at Lake Macquarie.”. 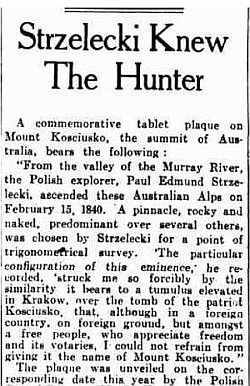 Strzelecki, who was a titled man and held the rank of Count, visited the farms of the A. A. Company at Stroud and Booral „the most northern farms of the colony.”
Mr. Havard quotes the explorer's observation while at Tablee:
„It is this orchard that shows most forcibly the extensive range which the bountiful climate of New South Wales embraces in isothermal lines, as there, the English oak is seen flourishing by the side of the banana, which again is surrounded by vines, lemon, and orange trees of luxur ious growth”.

On his return to London, in 1849, Strzelecki found himself famous, according to the report of „The Times” quotations from which are given by Mr. Havard. The explorer died in London on October 6, 1873.

Mr. Havard's tribute closes:
„ … From Gluszyna. near Poznan without the influence of family or wealth he won for himself an honoured place in Victorian England. Explorer, scientist, and philanthropist whose work reflected credit on his native land while it gave him standing abroad. Strzelecki should be regarded as one of the international links of Europe.”