In „The Town and Country Journal” of February, 1885, was published the text of a telegram sent by Lendenfeld from Cooma to the Government Geologist, Sydney, on his homeward journey from the Australian Alps.
The following arc important extract :

— Discovered and photographed undoubted glacier traces in several valleys about 5,800 feet. Mount Kosciusko the peak measured by Baron von Mueller, Professor Noumeyer &s. is not the highest (…) made ﬁrst ascent of higher peak* the highest mountain in Australia. 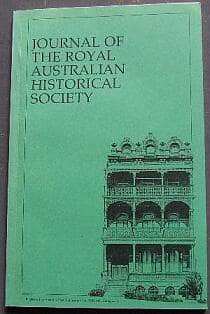 Lendenfeld’s claim was not allowed to go unchallenged.

In „The Sydney Morning Herald” of February 18, 1885, the following letter, headed „The Highest Point in Australia”, appeared over the name of no less a person that Mr James M. Spencer, who had been Lendenfeld’s own guide in January, 1885.

Sir —
My attention has been drawn to the correspondence appearing in the Sydney and Melbourne papers emanating from Dr. Lendenfeld describing his ascent to Mount Kosciusko and discovering a higher peak there than Count Strzelecki's.
In a letter to „The Echo” Dr. Lendenfeld states that the guide that accompanied him had never ascended this peak, or knew the existence of it.
When on the peak with Dr. Lendenfeld, I told him myself and sons had camped on it many a, night when cattle-mustang, and had driven thousands of cattle over it; that on 2nd February 1881, Mr. Adams the Surveyor General, his daughter, Mr. A. C. Betts, the District Surveyor of Coons and myself acting as guide, had been there, but we were unfortunate in the weather.
We experienced heavy fogs, sleet and snow, our beards being from all any and the aneroids were useless—would not work. We amped there two days in the hope that the weather would clear, but Mr. Adams had reluctantly to turn back. Now after aquainting Dr. Lendenfeld with than facts, why should he telegraph and again write to the press, stating that he was the discoverer of this peak. 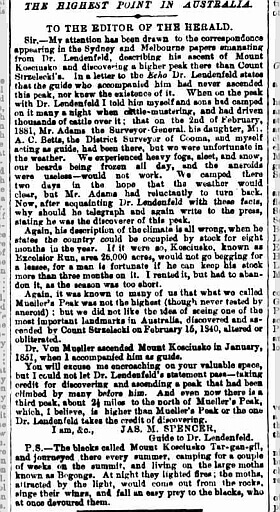 Again his description of the weather is all wrong when he states the country could be occupied by stock for eight months in the year. If it were so, Kosciusko, known as Excelsior Run, area 26,000 acres would not go begging for a lessee for a man is fortunate if he can keep his stock more than three months on it. I rented it but had to abandon it as the season was too short.

Again it was known to many of us that what we called Mueller's Peak was not the highest (though never tested by aneroid); but we did not like the idea of seeing one of the most impartnnt landmarks in Austrslia, discovered and ascended by Count Strzelecki on February 15th, 1840, altered or obliterated.**
Dr. von Mueller ascended Mount Kosciusko*** in January 1851**** when I accompanied him as guide.
You will excuse me on your valuable space, but I could not let Dr. Lendenfeld's statement pass-taking credit for discovering and encoding a peak that bed been climbed by many before him. And even now there is s third peak about 2-1/4 miles to the north of Mueller's Peak which I believe is higher than Mueller's Peak or the one Dr. Lendenfeld takes the credit of discovering.^
I am &c, / JAS. M. Spencer,/Guide to Lendenfeld.
P.S.
The blacks called Mount Kosciusko^* Tar-gan-gil and journeyed then every summer camping for a couple of weeks on the summit, and living on the large moths known as Bogongs.
At night they lighted ﬁxes; the moths attracted by the light would come out from the rocks, singe their wings and fall an easy prey to the blacks who at once devoured them.

It is apparent. from this letter that Spencer believed, like Lendenfeld, that the locally-termed Mueller’s Peak [now Mount Townsend] was the Mount Kosciusko of Strzelecki. This, of course, is in coflict with the official maps of the Department of Lands before mentioned.
„The Echo” of February 4, 1885, shows that Lendenfeld modified his claim in the following letter :

(…)
In the county map of Selwyn the height of the lower peak with the old cairn Mueller's Peak or Mount Kosciusko proper in put down at 2760 feet [apparently a typographical error for 7260 feet.— B. T. D] which height evidently belongs to the highest peak, the Ramshead of Mr. Townsend, the Mt. Clarke as I call it. Ramshead is a local term applied to a long range and not a deﬁnite point [Townsend applies the name to a deﬁnite peak, which is not Mount Clarke—B. T. D ], and does as the local men inform, not apply in exactly that point
(…)
Baron von Mueller
(…)
informed me that he ascended every peak in the group. It appears liker therefore that my ascent of Mount Clarke was the third. I claim however to have discovered which the higher peak was and to have been the ﬁrst to ascend it with the knowledge of going up the highest elevation in Australia ^** (…)

The official paper records of the Department of Lands, Sydney, also throw some light on the cartographic confusion which occurred with regard to the name „Mount Kosciusko”. The following extracts are interesting and illuminating:

(…)
The discrepancy has mainly Miser through Mr. Commins' mistaking Mueller's Peak for Kosciusko repeating the mistake made by Dr. Lendenfeld in 1885.
The latter published a map in January 1885 per Government Printer under auspices of Mines Department. Both Dr. Lendenfeld and L. S. Commins show Mueller's Peak as if it were on the main range with waters falling from it to both Snowy and Murray [Rivers] whereas, all the water from it falls into the Murray and the peak rises on a lateral spur about 3/4 of a mile to the west of the Dividing Range.

(…)
Dr. Lendenfeld claimed at the time abovementioned, with no small ﬂourish of trumpets, to identify this peak, for the first time, as the highest.
He then christened it Mount Townsend* and by this name Mr. L. S. Commins shows it **.
From the additional knowledge now before you it is evident that the late Mr. Townsend's survey is correct ***
P.S.
(…)
On Mueller's Peek stands a well-built cairn of loose stones about six (6) feet high probably built by some visiting scientist or in connection with the Trig. survey of Victoria ****

II.  Letter from A. Hanson of Flinders School, Geelong, dated 2nd February, 1892, to Under Secretary for Lends, Sydney. I have the honour to request that you will be good enough at your convenience to let me know what view your Department holds on the following points, namely:

a)  The height of Mt. Kosciusko.
b) —  Its claim to be considered the highest mountain in Australia. My reason for asking for the intormsticn is that I have just published a work on Geography in which following the lead of, as I considered, reliable modern authorities, I placed Mt. Townsend ﬁrst and Kosciusko second — my authorities were:
- 1.  A Geography published by Mr. A. Buckley, who I know has had considerable local experience in S.E. of New South Wales in which he mentions the Kosciusko group as the highest part of the Australian Alps, giving the highest peak Townsend (7256 ft.) Kosciusko till recently regarded as the highest point some 80 ft.
- 2.  Longman's „School Geography of Australasia” in which, page 67, are the words „the highest of all Mt. Townsend is 7,360 ft. high” and a footnote adds „this peak was so named by Lendenfeld after the Surveyor by whom this part of the Australian Alps was ﬁrst mapped in 1848 [1846-1847 — B. T. D.]. It was Lendenfeld himself who ﬁrst ascertained (January, 1885) that this was the highest of Australian Mountains.”

Yesterday I received a note from one of our District Inspectors of Schools in which he says „Cairn crested Kosciusko claims kingship among our Australian Mountains and its height is 7,256 ft., no other properly attested height reaching that ﬁgure.
Your Department is the ultimate authority of appeal on this point and if you would kindly settle it for me you would confer a greet favour on me and, in fact, the cause of Education, because the matter is of considerable interest to us teachers. [For reply, see p. 106-7.]

— (…)
>In about 1870 Mr. Black—now S. G. [Surveyor-General.— B. T. D] of Victoria was surveying the Murray River [and other geographich features — B. T. D.] and while in the vicinity determined to ascend the top of Mount Kosciusko. Three prominent peaks may be seen from Geehi Creek
— (…)
and in the absence of a guide Mr. Black cut his way through the scrub to what appeared the highest one and erected a cairn thereon. The cairn^ is on the one I [Orr] suggest should be called Mount Townsend.

About 14 or 15 years afterwards Dr. Lendenfeld ascended the range and finding the cairn asumed that previously it had been named by Mr. Townsend as Kosciusko. Dr. Lendenfeld then suggested that the mountain which is shown on our maps as Kosciusko (which is undoubtedly higher than the one he was on) should be named after the Surveyor.
The peak is not known generally, or rather in this district, as Muellers and as the name Townsend has been associated with the three peeks for many years (…) I think that under the circumstances it might be adopted for the name of the one in question.

On May 28, 1892, it was officially approved that the name „Kosciusko„ should be retained for the highest mountain and the name „Townsend„ for the second highest mountain in Australia.
On November 18, 1892, the Department of Lands, Sydney, replied to Mr A. Hanson’s letter of February 2 1892 :

(a) - That the height of Mount Kosciusko, as recently determined, chieﬂy from data. of Victorian trigonometrical survey is 1328 feet; and that Kosciusko is 68 feet higher than and bears 172° 31’ 39" (true) distant 18,341 links from a peak sometimes known as Mueller's Peak, but now named Mount Townsend, which appears to have been erroneously regarded as Mount Kosciusko in the Victorian trigonometrical survey;
(b) - also that as far as present geographical knowledge of Australia extends Kosciusko is the highest mountain.

In 1924 the heights of these Trigonometrical Stations were corrected, when the official heights were given as: Mount Kosciusko, 7305 feet; Mount Townsend, 7238 feet - the former being 67 feet the higher.

If you want to know more? — read below conclusion

In summing up from the foregoing data, there appears to be ample evidence that, according to the ofﬁcial maps mentioned of the Department of Lands, New South Wales, the Victorian Triangulation Survey Branch connected to a. peak erroneously called by it Mount Kosciusko, and that Dr R. von Lendenfeld’s claim of 1885 could not be substantiated

While the route plan and report of Strzelecki leave the matter of the particular peak he ascended and named somewhat uncertain (for reasons already mentioned), it certainly cannot be assumed that the ﬁrst official maps of the counties of Selwyn (1851) and Wallace (1860) and subsequent editions of these maps have been erroneously mapped, particularly so when it is realized that these maps are based on original surveys, field notes and local knowledge of the country of the earliest surveyor in this district.
Neither should Strzelecki’s repeated statements, that he named the highest point of land on the Australian Alps Mount Kosciusko, be ignored.

While tradition has it that Strzelecki ﬁrst ascended the present Mount Townsend, naming it Mount Kosciusko, official maps have always shown as Mount Kosciusko the summit known as such to-day. The data, revealed in this addendum should give geographers and historians food for thought.

The writer is grateful to the Department of Lands for having allowed access to its archives in connexion with this research.