Of the Great Famine - commemorated in Clifden

On Monday 18 june 2018, the Ambassador of Poland, Ryszard Sarkowicz and Cllr. Eileen Mannion, Cathaoirleach of the County Galway, unveiled in Clifden an artistic glass plaque designed and manufactured by Archiglass, commemorating Paweł Edmund Strzelecki.
Below press release from this ceremony.[*]

His Excellency, Mr Ryszard Sarkowicz, Polish Ambassador to Ireland and Cllr Eileen Mannion, Cathaoirleach of the County of Galway jointly unveiled a plaque to Polish Count Paweł Edmund Strzelecki; the forgotten Hero of the Great Famine at The Quay, Clifden, Co. Galway. 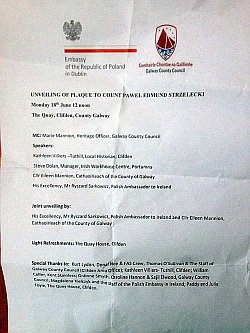 Today, Count Strzelecki is largely forgotten in Ireland, but without his generous intercessions and personal sacrifices on behalf of the people of the Clifden Poor Law Union (and 21 other Poor Law Unions), especially the children, the loss of live during the Great Famine would have been even higher.
In Clifden alone, the Strzelecki scheme helped almost 5.000 children.

Count Strzelecki, as he was usually called, was a world-renowned Polish explorer who worked in Ireland during the Great Famine as the main representative of the British Relief Association. He personally master-minded and executed a relief scheme provided to the famine-affected regions.
As a result of his dedication and tireless work in the West of Ireland in those horrible times, over 200,000 Irish schoolchildren were saved from starvation. Those innocent lives survived thanks to the innovative approach that Strzelecki introduced, focusing mostly on helping children as the ones most vulnerable and most endangered by the effects of the Great Famine.

The plaque was designed by renowned Polish architect, Mr. Tomasz Urbanowicz and is an exceptional piece of artistic architectural glass. He has represented Poland on three occasions with his artwork at the World Fairs EXPO.
His artwork can be found all around Poland, as well as many places around the world, such as in the European Parliament building in Strasbourg, France; on the world's biggest liner Queen Mary 2; in prestigious buildings in Paris and in Hamburg to name but a few.

Local Connemara Historian, Kathleen Villiers - Tuthill said:
Under the Count’s scheme, in the five months from November 1847 and April 1848, 527,723 rations were issued to 4,698 children in the Clifden Union.
I am quite certain that my ancestors were among those children, as indeed were the ancestors of many of those living in Connemara today, and it is because of the efforts made by Count Strzelecki, in ensuring that a portion of the funds raised by the British Relief Association went directly to feeding the children of this district, that I am here today.
We owe the count a great debt.

Cllr Eileen Mannion, Cathaoirleach of the County of Galway stated at the launch that:
Paweł Edmund Strzelecki came to Ireland in 1847 as an agent of the British Relief Association. He was delegated to Dublin as a Commissioner and began his great work with regards to Famine relief.
In addition to this his commanding eye-witness testimonies made certain that the British Relief Association had a thorough understanding of just how bad the Famine situation was in the country and ensured that much needed resources were made available to the distressed areas of the country.

Many of his testimonies were also reprinted in newspapers throughout Britain and provided an important counter balance to reports in the press suggesting that the suffering had been exaggerated. Working so closely with the poor took its toll on Count Strzelecki’s health and he contracted typhoid fever.
Given his tireless work, incredible determination and the compassion that he showed to our people this forgotten hero deserves to be commemorated and remembered and this plaque today is a first step in ensuring that he is remembered by us the people of Clifden, Connemara and County Galway.

Count Strzelecki died in London in 1873 and was buried in Kensal Green Cemetery. In 1997 his remains were transferred to a crypt in St. Adalbert Church in his home town of Poznań, Poland.

[*] We thank „Archiglass Gallery” in Wrocław for the received text and photos._Back to Top_