Report P. E. Strzelecki about
the crater of Kīlauea, Hawaii

from The Hawaiian Spectator of
October 6, 1838

Strzelecki's article (which is a de facto letter to Rev. J. Diell of Honolulu) was published in The Hawaiian Spectator and was reprinted by The Sydney Morning Herald on Friday, February 1, 1839, months before the arrival of Strzelecki in Australia.
The article was probably accompanied by a drawing by Strzelecki, who did not, however.
In the footsteps that followed him, there is an editorial note:
——————
The following graphic sketch was kindly provided by Count Strzelecki, and the Polish Nobleman and the scientific traveler, who has had some time resided in the United States and in Mexico, and is now visiting various portions. of the Pacific in H.B.M. ship Fly.

MY DEAR SIR:— Your kind request to supply the valuable publication of the Spectator with an account of my visit to the Volcano of Kirauea, on Hawaii, both pains and flatters me, for I regret much that my limited stay here, the daily current and accumulating objects of new and interesting inquiries, render any circumstantial description of it really impossible to me.
A few facts and few observations which a hasty and rough sketch brings forth is all I am able for the moment to supply you with I cannot even attempt to give you the slightest idea of the impressions which the awful sublimity of the volcano produced upon my imagination; that part of our being does not yield as easily as memory — it does not reproduce sensations; the rapture, the enthusiasm once gone by is lost for ever.

What I remember, and long shall recollect, as showing the mighty influence of mighty objects upon me, are the difficulties I had to struggle with before my eye could be torn away from the idle, vacant, but extatic gazing with which I regarded the great whole, down to the analytical part of the wondrous and unparalleled scene before me: I say unparalleled, because having visited most of the European and American volcanoes, I find the greatest of them inferior to Kirauea crater in intensity, grandeur, and extent or area. 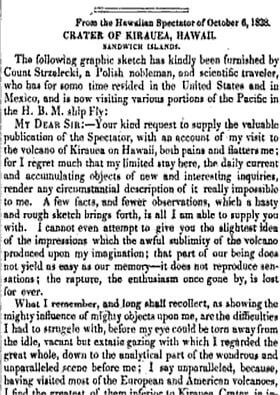 The abrupt and precipitous cliff which forms the N.N.E. wall of the crater
— found, after repeated observations, to be elevated 4,104 feet above the level of the sea;
— overhangs an area of 3,150,000 square yards of half-cooled scoria, sunk to the depth of 300 yards, and containing more than 328,000 square yards of convulsed torrents of earth in igneous fusion, and gaseous fluids constantly effervescing, boiling, spouting, rolling in all directions like waves of a disturbed sea, violently beating the edge of the cauldron, like an infuriated surf, and like surf spreading all around its spray in the form of capillary glass which fills the air and adheres in a flaky and pendulous form to the distorted and broken masses of the lava all around, five cauldrons, each of about 5,700 square yards, almost at the level of the great area, and containing only the twelfth part of the red liquid; the sixth cauldron is encircled by a wall of accumulated scoria of fifty yards high, forming the S.S.W. point;
— the ale mau mau of the natives; to which the bones of the former high chiefs were consigned;
— and the sacrifices of the goddess Pele offered;
— the abyss of abysses the cauldron of cauldrons;
— exhibiting the most frightful area of about 300,000 square yards of bubbling red hot lava;
— changing incessantly its level;
— sometimes rolling the long curled waves with broken masses of cooled crust to one side of the horrible laboratory;
— sometimes, as if they made a mistake, turning them back with spouting fury, and a subterraneous terrific noise of a sound more infernal than earthly; around are blocks of lava, scoria, stages of every description and combination – here, elevated by endless numbers of superimposed layers in perpendicular walls of 1,000 feet high;
— there, torn asunder, dispersed, cracked, or remoulded;
— everywhere, terror, convulsion;
— mighty engine of nature;
— and nothingness of man!

No where does the solution of the great problem of volcanic fires by Sir Humphrey Davy, receive a more palpable illustration than here. The access of the water to the ignited masses of these minerals alkaline and earthly lavas, by which that great philosopher explained the convulsions of volcanic fires, is displayed here in post portentous – most awful effects. It is only to those millions of vents all around the crater through which the superabundance of steam escapes;
— to the millions of fissures through which the sulphurous and sulphuric acids liberate themselves from beneath, that the preservation of Hawaii from utter destruction, by the expansive force of steam and gasses can be ascribed.

The nature of the volcano, with its uncommonly intense heat, and so many wide and easy openings, is to eject nothing without alteration, and to sublime every variety of substance which the concomitants of the volcanic fires embrace. Thus, here is the rare volcanic glass in capillary forms and many perfect vitrifications; the muriate of ammonia in efflorescence, often conchoidal, often in elongated Hexahedrale.

— and in one single instance, even in that rare form of a cubic chrystal; thus, the sulphuret of arsenic, both as realgar and orpiment; the sulphur itself, in most beautiful incrustations, chrystalised in cubic or truncated octahedrons; the petro aluminaris of Solfa (Italy), or alkaline sulphate of alumine, imbedded sometimes in crevices of lava sometimes in argilaceous earth; thus, the singular and rare cavernous lava, known hitherto to exist only in Iceland;
— its large tumefactious in blisters and bubbles, from a crust of the finest gloss to an arch of four feet thick, forming a covering through which the superabundance of lava in the crater discharges itself, as through subterraneous tunnels, in all directions of the island.

A prolific imagination can find here a vast field for fanciful speculation on the origin, duration, and probable or possible results of the continued operations of the frightful and gigantic volcano. Science will never tire in the study of nature; but alas! beyond what she sees, and what strict inductive forms allow her to conclude, she must stop;
— admire;
— bow and …
— repeat „Sapientia huius mundi stultitia est”.

With the greatest respect and consideration, believe me, my dear sir, your most obedient servant,
PAUL EDMUND DE STRZELECKI.

To the Rev. J. Diell, Honolulu