President Michael D. Higgins opened an exhibition highlighting the life and achievements of Count Paweł Strzelecki, a Polish explorer and scientist, who volunteered to work in Ireland to assist in the Famine relief efforts.
Strzelecki developed a new mode of assistance, feeding starving children through the schools network. He extended daily food rations to schoolchildren across the most famine-stricken western part of Ireland.

The exhibition was inaugurated by the Embassy of Poland in Dublin together with the Royal Irish Academy.
The following quotes are a summary of the Speech given by the President of Ireland Mr. Michael D. Higgins at the Official Opening of a Polish Exhibition on the Great Famine at the Royal Irish Academy, Dublin, Wednesday, 8 May 2019.

The Ireland of the late 1840s had not experienced the impact of the public health reforms championed by Edwin Chadwick. Sanitation and water supplies were compromised, leading to a huge incidence of diseases such as typhus, yellow fever and cholera.
In his testimony to a House of Lords Committee in 1847, Father Theobald Mathew, whose statue adorns Cork’s St. Patrick’s Street, described his efforts to bury the dead:
„ Each day there was a large pit dug, and all that died that day were put down; the pit was covered up; I had four men employed. Some days there were sixty or seventy a day buried, and some days more”.Right-speech given by M. D. Higgins the President of Ireland.

Bottom-speech by M. D. Higgins the President of Ireland 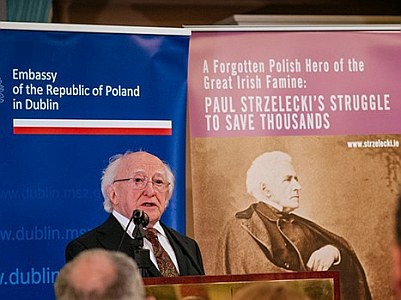 The British Government’s real intentions in relation to Ireland was to clear the land of tenants and secret organizations through harsh Workhouse regimes. The 1841 Census shows that some 40 percent of Irish families were recorded as living in of what was called a bothán, a one-room mud-hut described on the Census as „fourth-class houses” that were considered generally unfit for human habitation.

The families who lived in a bothán were drawn overwhelmingly from either the over 3 million landless agricultural labourers in Ireland at the time, or the nearly 1.5 million cottiers that were leasing tiny plots of land, often barely enough to keep their families alive.
They, like the tenant categories above them, had no security of tenure, but were frequently without the means of survival itself, and, with nothing to sell, were without the means to flee.

The English journalist Joseph Kay was appalled to learn that their homes were simply destroyed when they were evicted:
„ If they do not pay their rent at the proper time, they are liable to be turned adrift, even in the middle of the night, into the bleak road, without a shelter, and with their helpless wives and children. No notice is necessary; no notice is given. ”

The Cork Council having beggars routinely rounded up every night and under the Authority of an Act of Parliament they take up sturdy beggars and vagrants, they confine them at night in a Market Place, and the next morning send them out in a cart five miles from the town, and there they are left, and a great part of them perish, for they have no homes to go to.
There are of course countless others who, without the resources to emigrate, gathered in the large towns and cities, for between 1844 and the 1850s, many, including pregnant women, took to the roads to survive.

By 1849 the nation was in the midst of the apocalyptic conditions of the fourth year of famine, at a time when the responsibility for public action had been abdicated by the British Government and passed to the indebted Irish Poor Law Union.
The 1851 census records only 135,000 habitations described as bothán, testament not to any programme of assistance, but to the obliteration and destruction of any record that these families had even lived their lives on the land.

These classes of men, women and children in the lower reaches of the class pyramid – the labourers and the cottiers – bore the very worst consequences of the Famine.
It is they who are, in statistical terms, more likely to be found amongst the more than one million who died.
If some were lucky enough to be assisted, such as those 200,000 children helped by Paweł Strzelecki, they are among the 2 million who subsequently emigrated to places like Britain, North America and Australia.

Were it not for those like Paweł Strzelecki, the numbers who died of starvation would, of course, have been even higher. In February 1847, Strzelecki reached Westport and wrote, „No pen can describe the distress by which I am surrounded”. His testimony broke the silence as it was published by several British newspapers and helped to illuminate the plight of suffering in Ireland.

Today, Ireland is recognising a special friend of the Irish, Paul (Paweł) Edmund Strzelecki, one of the great Polish humanitarians of the nineteenth century. This exhibition tells the captivating story of Strzelecki, an explorer and geologist by profession, thanks to whose efforts perhaps some 200,000 children were saved from starvation during the Great Irish Famine of the 19th century.
Strzelecki was the main agent of the British Relief Association, a charity established by a group of prominent philanthropists in 1847, that was the largest private provider of relief during the Great Irish Famine and Scottish Highland Potato Famine of the 1840s.

Strzelecki developed a visionary and effective mode of assistance: feeding starving children directly through the schools. He extended daily food rations to schoolchildren across the most famine-stricken western part of Ireland, while also distributing clothing and promoting basic hygiene.
At its peak in 1848, around 200,000 children from all denominations were being fed, many of whom would have otherwise perished from hunger and disease.

Despite the British Government cutting State-backed Famine relief in 1847, Strzelecki remained in Ireland, assisting poor families until 1849, even though he himself was suffering from the effects of typhoid fever contracted in Ireland.
Strzelecki also helped impoverished Irish families to seek new lives in Australia where he had been an explorer in the years prior to arriving in Ireland. During his three years in Ireland, he never sought any remuneration for his work.

His commitment was widely recognised and praised by his contemporaries, and it is appropriate that, in May 2015, a plaque honouring Strzelecki’s efforts was unveiled by Lord Mayor Christy Burke and the Mayor of Poznań, Mr Jacek Jaśkowiak, and can be found on Sackville Place in the heart of Dublin’s city centre.

This exhibition rightly endeavours to bring of Paul Edmund Strzelecki's achievements and legacy more widely into the public eye.
The Polish Embassy in Ireland coordinated this exhibition which is a flagship initiative dating back to 2016 when the then Ambassador Sarkowicz advocated the idea to commemorate the work of Paweł Strzelecki in Ireland, a hugely significant contribution to the alleviation of suffering and death during this darkest time in recent Irish history.

People of Ireland thank Poland for Paweł Strzelecki’s service to their nation.