In the affections of those of us who travelled to Euro 2012, and despite the footballing humiliations suffered there, the city of Poznan retains a soft spot. So I’m pleased to see that a son of that hospitable town – a man most Irish people won’t have heard of – will be belatedly honoured in Dublin next month for his work in Ireland during the Famine.

We have very long memories in this country, as English rugby fans may notice on Sunday when Charles Trevelyan’s role here in the 1840s will yet again be used for sports-motivational purposes. Yet the name of Pawel Strzelecki (not as easy as to sing about, it’s true) has been somehow forgotten. And this is all the more regrettable because he did nothing but good.

Strzelecki was born in Poznan in 1797. He served in the Prussian army for a while, then took to travelling, and had already made his name as an explorer, charting the more remote parts of Australia, by the time he became a British subject in the fateful year of 1845.
His subsequent appointment as a famine relief agent in Ireland was the idea of a British charity set up by philanthropists, including the Baron Lionel de Rothschild, with a fund of nearly half a million pounds.

They reasoned that the Irish would be more trusting of a Pole than an Englishman. And at a time when the man officially in charge of the relief effort, the aforesaid Trevelyan, was still dragging his heels out of fear that the natives might abuse his government’s generosity, they were probably right.

„No pen can describe the distress by which I am surrounded”
he wrote - (as quoted in Cecil Woodham Smith’s The Great Hunger)
„You may now believe anything which you hear and read, because what I actually see surpasses what I ever read of past and present calamities.”

In any case, Strzelecki was appointed on January 1st of what became „Black‘47”. He left immediately for Ireland’s northwest – Mayo, Sligo, and Donegal. And from the moment of his arrival, the shape of the unfolding disaster was obvious to him.

By the summer months, even before the potato failed again, Strzelecki was distributing £ 13,000 a week to the starving, while Trevelyan still refused to loosen the treasury purse strings. When he returned to London in the autumn, the Pole was so traumatised by his experiences that he refused to accept any payment for his services.
„I never could justify myself to my inner tribunal if I were to take money for what I have gone through,” he said.

But bad as 1847/8 was, Strzelecki would declare during one one of his subsequent visits that 1849 was the worst year of all. The cumulative effect of four years of crop failures, combined with the hardships of the official relief regime, had left survivors „skinned down to the bone”, he said, with an air of depression over the country, born from a belief that „the land is cursed”. 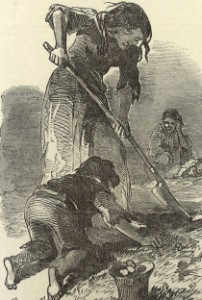 Digging for potatoes during the famine
Unfortunately, by then, philanthropy for Ireland had gone out of fashion. So members of the government launched a private subscription scheme, raised £ 10,000, and again entrusted Strzelecki with distribution. All told, it has been estimated that the various works in which he was involved saved 200,000 lives.

← Digging for potatoes during the famine

In the parts of Australia he explored, Strzelecki has many things named after him. They include a national park, a desert, a highway and a creek. Now, finally, Dublin is also dedicating a space in his honour, albeit a small one. It’s a piece of the side wall of Clery’s, in Sackville Place, to be exact.

And it will soon be the site of a _ plaque, to be unveiled _ on Sunday March 29th, in belated recognition of Strzelecki’s work.
The plaque ceremony will be the conclusion – or nearly – of the Polska-Éire 2015 Festival, details of which were announced yesterday in the Aviva Stadium (see PolskaEireFestival.com).

The festival runs at venues all over Ireland for nine days from March 21st and is designed to bring at least some of the country’s Polish community – an estimated 150,000 – together with the host population under the umbrellas of culture, sport, debate, food and drink, and other subjects of mutual interest.

The programme includes a presentation on Strzelecki’s „life and times”. But there will also be a big football element. Indeed, I mentioned earlier that the plaque-unveiling would not quite conclude the festival.
That’s because it takes place a couple of hours before a certain Euro 2016 qualifier at the Aviva, also on March 29th, during which the deep and growing friendship between Ireland and Poland may be temporarily suspended.