We might, at this point, also add that Strzelecki's stay in Hawaii has been unofficially mentioned by another distinguished European visitor to the Hawaiian Islands Lady Jane Franklin, the widow of Admiral Sir John Franklin who befriended Strzelecki during the latter's visit to Tasmania. Thus she made the following remark on April 21, 1861 in her Hawaiian journal:

„All travellers (among them Count Strzelecki) describe it (i.e. the crater of Kilauea) as the wonder of wonders.”[11]

This remark would indicate that she had either read or heard his personal account of Kilauea.
The official mentioning of Strzelecki's contribution to Hawaiian volcanology came only posthumously in the form of the presidential address by Sir H. Bartle Frere at the annual meeting of the Royal Geographical Society of London. The speaker made the following comment on Strzelecki's scientific activities on the Big Island:

An account of the volcano of Kilauea, in the Sandwich group has been introduced by him into description of the Crystalline Rocks of New South Wales, with some valuable observations on the scientific classification of volcanic products.[12] 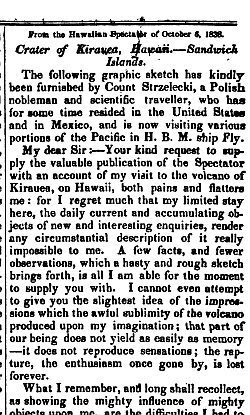 It seems that Strzelecki gave us something more than just „some valuable observations on the scientific classification of volcanic products” or wheat ever it means. To him Kilauea was more than a huge pile of streaming lava and different rock formations.
He also saw its unsurpassed grandiosity which could put aflame the imagination of even a most unscientifically minded reader. For the purpose of an illustration we might consider the following passage:

Its present size surpassed that of every other known volcano, jet it now hardly displays more than a third of this pristine grandeur Like some of the old Egyptian cities, Kilauea has no other chronicles of the past than a part of this ancient walls still standing, and a part either in runs, or buried at some period beyond the memory of man, under ashes of successive eruptions, though still to be recognized and traced by means of the masses which stand at intervals as landmarks. [13]

The majestic Kilauea was not the only thing which captured Strzelecki's attention during his rather brief visit to Hawaii, although so far he has received scholarly recognition only for his pioneering study of this volcano.[14]
And, in fact, his book which unfortunately is the only major source we have to reconstruct Strzelecki's activities in Hawaii, contains several interesting references to Hawaii which go far beyond his geological interests. Thus, for example, it turned out that he had also seen the crater of Mauna Loa, although it is not clear whether he claimed its peak: [15]

The opening of the crater of Mauna Loa which is now 8,000 feet above (no doubt he meant above Kilauea, diverted the course of the intense subterranean hat from the crater of Kilauea, or at least lowered its intensity.

This passage would indicate that he missed the actual height of Mauna Loa by some 1,600 feet, considering that the exact height of Mauna Loa is 13,796 feet and that of Kilauea 4,077.[16] This was not so bad in view of the imperfect nature of his measuring instruments.

His next reference to Hawaii concerned the climatic conditions on the different elevations of the Big Island. It appeared in the section of his book that dealt with the climate of New South Wales and Tasmania. He used his Hawaiian data to support his thesis on air currents according to which
„the colder current moves between two warmer, entirely by virtue of its volume”.
Strzelecki came to this conclusion when he ascended Mauna Loa, saying: [17]

In spite of the fact that Strzelecki's references to Hawaii occur only marginally in his book, we might conclude on the basis of their evidence that his stay on the Big Island and Oahu had far reaching scholarly consequences. They also prove that he closely observed not only the nature but also the people of these Islands. He remarks about the language, religion, culture and politics of the Sandwich Islands support the view that he was able to reach correct conclusions from his contacts with the Hawaiian people and their nobles, as well as with the American and European residents of Honolulu. The presence of such contacts has been recently confirmed by Wacław Słabczyński, the great Polish authority on Strzelecki.[18]

Perhaps, as a result of his conversations with Hawaiians and European residents in Hawaii, he wrote these strong words which highly of his religious convictions and humanism:[19]

The voice of Christianity, of disinterested spiritual religious faith, was rendered ineffectual by civil disorganization. Those in trusted with its interest, their own safety threatened, saw themselves compelled to resort to power. In some instances, the power easily fell into their own hands, as in the Sandwich, Friendly, Society, and Gambier Islands: in others, it was resisted, as in New Zealand, New South Wales, and Van Diemen's Land.

Continue in part 3 on the _can be found here_ …