Excerpt from the diary by Sir William Fraser

I KNEW Count Strzelecki well: he was an intimate friend of Lord Palmerston: and was supposed to be employed by him in more or less secret investigations.

He was a clever, agreeable, and very talkative man. I have a very strong suspicion, although he flourished before my time, that a name was given him by Society, which could not have added to his dignity.
No one can have forgotten who has read, and who has not ? the description of Mrs Leo Hunter's breakfast-party : the tears of enthusiasm rise to my eyes while Memory recalls the introduction to Mr Pickwick of the enterprising foreigner Count Smorltork.

At an afternoon party, given by my friend Mrs Marlay at Saint Katherine's Lodge, Regent's Park, at which Gustave Doré was present, I said to the Count in Mrs Leo Hunter's words: „I want to introduce two very clever men to each other.”
I added …
„You remember Count Smorltork's introduction to Mr. Pickwick.”

Count Strzelecki's countenance changed in the most terrible manner: his eyes seemed coming out of his head : he started back; and gave me a look in which deep disgust and violent anger were closely mingled. I introduced Doré to him: and he quieted down.

Reflecting as I drove home upon this startling behaviour, it flashed into my mind that at an earlier period than my own he must have been known as Count Smorltork.
I have now no doubt what-ever about it: and that he imagined, which was certainly very far from the truth, that I was making fun of him by recalling this not altogether inappropriate nick-name. 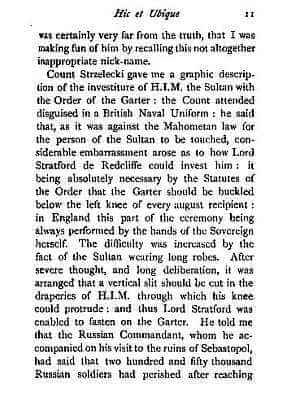 Count Strzelecki gave me a graphic description of the investiture of H.I.M. the Sultan with the Order of the Garter: the Count attended disguised in a British Naval Uniform: he said that, as it was against the Mahometan law for the person of the Sultan to be touched, considerable embarrassment arose as to how Lord Stratford de Redcliffe could invest him:
it being absolutely necessary by the Statutes of the Order that the Garter should be buckled below the left knee of every august recipient: in England this part of the ceremony being always performed by the hands of the Sovereign herself.

The difficulty was increased by the fact of the Sultan wearing long robes. After severe thought, and long deliberation, it was arranged that a vertical slit should be cut in the draperies of H.I.M. through which his knee could protrude: and thus Lord Stratford was enabled to fasten on the Garter.

He told me that the Russian Commandant, whom he accompanied on his visit to the ruins of Sebastopol, had said that two hundred and fifty thousand Russian soldiers had perished after reaching the Seat of War: in addition to the countless numbers who had died on their march.