Louise Southerden tiptoes through the buttercups on a guided overnight
walk in Kosciuszko National Park.

First, there's the past. Driving along the Alpine Way to the start of our two-day hike in Kosciuszko National Park, we see hillsides of spidery white snow gums and the skeletal remains of alpine ash trees - poignant reminders of the bushfires that devastated two-thirds of the 690,000-hectare park in 2003. 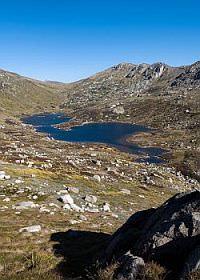 Further on at Thredbo there's the present: a chairlift taking day-trippers to the start of the six-kilometre walkway that leads to the 2228-metre / 7,310 feet /summit of Mount Kosciuszko. More than 100,000 people make this pilgrimage every summer and we're among them, however we're taking a longer, more circuitous route.

Starting at Dead Horse Gap, four kilometres beyond Thredbo, we'll follow the Dead Horse Gap Track, then head cross-country to our alpine campsite, watch the sunset from Kosciuszko and walk out the next day to Charlotte Pass. Kosciuszko Alpine Guided Walks, with whom I'm doing the trek, has been offering weekend walks in the national park for six years and last month started this walk, from Dead Horse Gap to Charlotte Pass.
On our first day we're blessed with a cloudless sky and brilliant sunshine. The walking is easy, too, the terrain undulating and open. Best of all, though, the alpine hills are alive with wildflowers.

There are 212 species of flowering plants and ferns in the park, 21 of which are endemic, and they take turns blooming between November and February, which is wildflower season.
No sooner have we started walking, in fact, gently uphill through a forest of snow gums, than we're stopping and stooping to inspect dots of colour at our feet. In two days, we see more than 30 different wildflowers, thanks to our guide Nick's experienced eye: pennyworts and pineapple grasses, alpine sunrays and silver daisies, derwent speedwells and egg-and-bacon plants, eyebrights and billy-buttons and seven kinds of buttercup - including the dwarf buttercup, which grows only in icy alpine streams.
There's wildlife, too. We see a small but venomous copperhead snake (one of only two species of snake in the park) and when we stop for morning tea that first day, more than a few Australian ravens gather on a granite boulder behind us, making me feel like Tippi Hedren in The Birds. 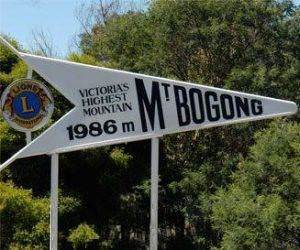 That so-quiet-it's-eerie feeling returns when we stroll to the summit from our private, NPWS-approved campsite after dinner. We have the top of Kosciuszko all to ourselves - the last day-trippers having caught the last chairlift back down to Thredbo three hours earlier, at 5pm - which feels like a rare privilege.

As we're waiting for the sun to sink behind lines of purple ridges - including Mount Bogong, Victoria's highest mountain, some 90 kilometres away - Nick recounts some of Kosciuszko's history, from the days when 13 Aboriginal tribes converged on the mountain they called „Targangil” to feast on migrating bogong moths and conduct initiation ceremonies [ sic! ] -[*]- to the February day in 1840, when Polish explorer Paul Strzelecki named the peak after freedom fighter Tadeusz Kosciuszko because it reminded him of an earth-mound memorial to Kosciuszko in Krakow. (Nick has visited the memorial and agrees there's some resemblance).

No sooner has the sun set, in a blaze of pinks and oranges, than the weather changes. Dark clouds roll in fast, forcing a hasty retreat to camp by the lights of our head torches and obliterating any hopes we'd had of stargazing - but by the time we reach the tents, we're all happy to retire to our goose-down sleeping bags anyway.
On Sunday morning, I poke my head out of my east-facing tent flap in time to see the sun rise and shine. Last night's clouds have been reduced to a fluffy blanket over everything below us and by the time we've demolished a breakfast of pancakes and maple syrup, the sky is blue again. 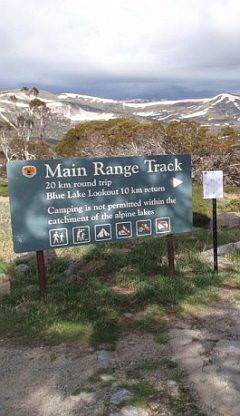 Mount Kosciuszko might be the high point of this two-day walk but it's not the only highlight, not when the second day is spent wandering nine kilometres along the 22-kilometre Main Range Track.

Widely regarded as one of the most scenic trails in the country, it's a daisy chain of alpine offerings: mainland Australia's five glacial lakes, remnant snowdrifts, the windiest ridge in Australia, the headwaters of the legendary Snowy River, back-country views of steep slopes popular with extreme skiers in winter - even a gaggle of 2000-metre-plus peaks that makes us temporarily lose sight of Kosciuszko itself.

Finally, after a leisurely descent, the end is in sight - at the top of the aptly named Heartbreak Hill. The patterned trunks of snow gums en route offer plenty of excuses to stop and rest but when we arrive at Charlotte Pass, hot, sweaty and out of breath, it feels as if we've been away much longer than two days.

The beauty of this weekend walk is that it offers three big experiences: a remote, high-country campsite; a private sunset-viewing session at the top of Australia; and time to stop and smell the Kosciuszko roses (and assorted other wildflowers).
Add to these its more subtle pleasures - walking off the beaten track, breathing mountain-fresh air and immersing yourself in one of Australia's unique environments - and this humble weekend trek is quite possibly destined to become a classic.

The information provided here is incorrect. The Bogong Moth live nearby but not on the Mt Kosciuszko itself.
Read more _about the history_ of names Mt Kosciuszko.
The name Tar-gan-gil was given by Aborigines to the whole mountain massif consisting of numerous peaks.
They apparently were not interested in the particular peak measured by Paul E. Strzelecki in 1840 and discovered to be the highest one on the Australian continent.