Sir Paul Edmund, Count de Strzelecki, the noted Polish explorer, was born in 1796, or two years after General Thaddeus Kosciusko had been taken prisoner by the Russians, when severely wounded, at the Battle of Maciejowice which decided Poland's final partition.

Even as a boy Count Streleskl showed a marked interest in botany and geology, and his father sent him to the University of Heidelberg to complete his studies. He also studied mineraloay and botany in Switzerland and Italy and later various sheep-farming systems in Scotland.
After having extensively explored North and South America, part of China several groups of Pacific Islands, including Hawaii, Marquesas, and Tahiti. Count Streleski arrived in Sydney in April, 1839, where he stayed as guest of the Governor, Sir George Gipps.

On his arrival in Sydney, Count Streleski admits that he was prepared for all eventualities.
„The evening I eaected my disembarakation. I did it with all imaginable precaution leaving my watch and purse behind me and arming myself with a stick, being resolved to encounter inevitable dangers with the least possible risk.” — he wrote. 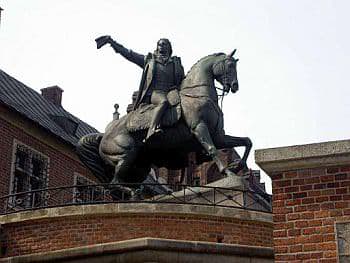 (…)
„I found, however on that night in the streets of Sydney a decency and quiet which I have never witnessed in any ports of the United Kingdom. No drunkcnness, no sailors' quartels, no appearance of prostitution were to be seen.”

In 1839, James Macarthur resolved to explore the extensive plains situated between what is now known as the Ninety Mile Beach and the mountain ranges, and invited Count Streleski, as an experienced explorer, to join the party.
On February ll. 1840 the party, consisting na ot Macarthur, the Count, James Riley, two servants, and an aboriginal Charlie Tatra arrived at Ellerslie, on the Tumut, and left on March 2, weil provided with provisions and instruments. Streleski, who led the expedition, preferred to walk, but the others rode on horses, which they were eventually forced abandon.

Streleski's report was subsequently forwarded by Sir George Gipps to the Colonial Office in London, and pulished in 1841. The spelling of the Count's name is „Streleski” throughout, probably at the request of the explorer, in order to resemble the Polish pronunciation.
In his despatch, to which the report was appended Sir George Gipps, in describing the exploration of Gippsiand, writes that it was entirely unknown until „Count Streleski a political exile who since the latter mistortunes of Poland has devoted himself w the pursuits of science attemted and achieved the exploration.”

In his report the Count states that he was particularly anxious to ascertain the course of the dividing range, its elevations, configuration, and ramifications. He had already explored on foot 2200 miles of New South Wales as far as the Murrumbidgee River, and felt that a survey of the uninhabited and untrodden country around Wilson's Promontory was indispensable.

Therefore
„I take the liberty to lay it before the colonial Government of New South Wales, confident that my great devotion and the obligation every Pole finds himself under to the English nation, will serve to excuse and rend legitimate my somewhat uncalled for communication”.

The crossing of numberless creeks and steep ascent of the ridge made progress very slow and difficult, especially as, in order to protect his instruments, the Count carried their entire weight on his back.
„On the l5th February, about noon, I found myself on an elevation of 6510 feet above the bed of the sea.”
he writes :

„ seated on perpetual snow, a lurid sky above me, and beow an uninterrupted view over more than 7000 square miles.
The eye wanders to the Three Brothers, or Tintern, thence to the sources of the Tumut and Murrumbidgee, discovers with ease the windings of the Murray, the course of the Dividing Range, the summits of Mounts Aberdeen and Buller, and is seduced even beyond the required limits of a survey.

The particular configuration of this eminence struck me so forcibly by the similarty w a mound elevated i Cracow over the tomb of the patriot Kosciusko, that although in foreign country, on foreign ground, but amongst a free people, who apperciate freedom and its votaries, I cloud not refrain from giving it the name of Mount Kosciusko. It is from the view of the adjcent country which I obtained from Mount Kosciuszko that the source of the Murray ascertained its tributaries traced, the direction of my frather progress to the south and further survey decidied upon.”

General Thaddeus Kosciusko had a distinguished military career in Poland, and fought under Washington during the War of Independence, returning to his native country in 1792.
When the last partition of Poland became imminent, the country being overrun with Russian armies the Pol's struck for independence in 1794, and Kosciusko was given dictatorial powers at Cracow. Soon however, Kosciusko found himself fighting, on three fronts, for Austria and Prussia treacherously attacked him from the rear.
Wounded at the battle of Maciejowice. he was taken prisoner by the Russians and taken to St. Petersburgh, when he remained prisoner of state at the fortress of St. Peter and Pt.l.

In 1796 Catherine the Great died, and one of the first offilcial acts or Tsar Paul I, was to liberate Kosciusko, who, still suffering from the effcets of his wound, proceeded to Switzerland, where he spent the remaining years of his life.

On his death in 1817 the body was brought from Switzerland to Cracow and buried in the royal vaults of the ancient castle.

Almost simultaneously the citizens of Cracow decided to commemorate Kosciusko's memory by erecting a mound on a hill overlooking the river Vistula. It was completed by voluntary labour in 1823.
During his recent trip abroad, Mr. H. Lamble. Director of the New South Wales Government Tourist Bureau, visited Cracow and secured some very interesting copies of Polish paintings or Kosciusko, the amous swearing in ceremony of 1794, the battle of Raciawice and others, which are exhibited at the Tourist Bureau at the present moment, prior to being forwarded to the Mt. Kosciusko Hotel.