What is Kosciuszko Mound - in Cracow

The Polish nation wished to commemorate General Kosciuszko by means of a permanent and simple monument. On July 19th1820, three years after his death, a decision was made to erect a symbolic tomb of the Leader, build of native soil and stones, on the hill of Blessed Bronisława in the western part of Cracow.

On the third anniversary of his death, a Foundation Act was read aloud and placed in a case made of glass and marble, containing tokens of the Kosciuszko National Insurrection - it was built from the soil from battle fields of the Kościuszko Uprising – Raclawice, Maciejowice, Dubienka and from the places of battles fought by Tadeusz Kościuszko during the American War of Independence.

Years of construction work followed, financed from patriotic pecuniary donations of compatriots from all of the territories of Poland under partition.
Hill blessed Bronisława shoots up just 333 m above sea level, but height of mound is equal 34,1 m (of 1,092 feet above sea level).
It has emerged in result high Mound, the national memorial monument, seen from almost everywhere in Cracow. 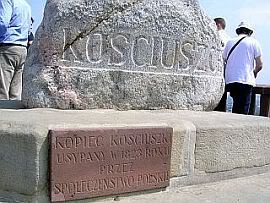 The monument was completed in 3 years (from 1820-23) and finally, the top of the Mound was crowned, on which a granite boulder with an inscription rests (see left) see above „Kosciuszce” (to Kosciuszko) was brought from the Tatra Mountains in June 1860.

It was erected as a memorial to Kosciuszko and the immortal idea of Poland’s independence, a sign of hope and faith in sovereignty.

In the middle of the 19th century Austrian authorities decided to establish Cracow as one of the fortresses in the frontier defense system of the Austro-Hungarian Monarchy, erecting a stronghold on the Hill of Blessed Bronisława, around the Mound, in the shape of a citadel.
They built fortifications around it which can be visited today.

In this manner, the Mound obtained another symbolic dimension – it became not only a place of Polish, but also of universal history.

In 1938, the Mound was listed in the register of monuments and due to this fact it is subject to legal protection.
During the German Nazi occupation in Poland during World War II several attempts were made at destroying the Mound, though unsuccessfully, Kosciuszko's statue at the Wawel Castle, however, was destroyed.

In 1946, the 200th anniversary of Kosciuszko's birthday was celebrated openly. This year was even called the Year of Kosciuszko. The new authorities of the Polish People's Republic gladly accepted Kosciuszko. 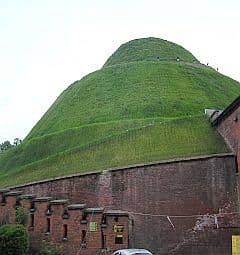 A serpentine path leads to the top, from which point there is usually a beautiful view of almost one hundred miles, where on a clear day one can see the Tatra Mountains to the south, the Benedictine and Camaldolese monasteries to the west, and Nowa Huta and the communist destruction of the countryside surrounding Krakow, to the east.

About four kilometers away, one can see the main market square and the towering St. Mary’s Church, as well as Wawel castle a little to the south.
Directly below, lies the Vistula River, as well as the common green (Krakowskie Blonie), where during the first pilgrimage where John Paul the Second to Poland in June 1979 would celebrate Mass between Wawel Castle and the Mound on his visits to Krakow.
Two millions Poles gathered there and heard his Holiness say: I ask you newer to cut the roots from which we grow.

The biggest threat was Mother Nature during the floods of the 70ties and the terrible flood in 1997, destroyed a large part of the Mound. A new strengthened and illuminated Mound was given back to the public in 2002.
Under the crowning stone of the Tatra granite, several tokens of recent history were laid, including a Solidarity badge, a copy of the Constitution of the Third Republic of Poland and a silver coin commemorating the 20th anniversary of John Paul II's papacy.

Here you will find dramatic Polish history in special exhibitions (subtitles also in English), and of course enjoy one of the best views of the city from the top of the hill. For Poles he is the personification of the popular insurrectionary tradition that involved peasants as well as intellectuals.

The Kosciuszko Mound is not only a peculiar place on the Polish land, but also a special one on the Earth. The everlasting phenomenon of Kosciuszko denotes the power of solidarity between Poland and its people and Europe and the World.