Kossie with a Z - reports by Martin Daly

Martin Daly reports on how the Pope became part of a plan to restore a missing Z.

THERE is no way of knowing for sure what did it but the prayers of his Holiness, Pope John Paul II, are believed to have helped.

So, too, did His Excellency, the President of Poland, who noted in a letter to Australia that bilateral relations could be strengthened if something was done.

Maybe the whole affair was pushed along by former Prime Minister Gough Whitlam, who had been trying for 20 years to have the wrong put right and who employed that famous word recalcitrant to describe those who opposed it.
Or maybe it was the persuasive powers of diplomats in Mexico, Australia and Poland, authors, broadcasters, women and men of letters and hundreds of battlers around the nation who insisted action had to be taken.

Whatever the reason, Australians of Polish extraction are rejoicing because of a recommendation to restore a lost consonant to the nation's highest mountain after 157 years of getting it wrong.
A simple matter, you might think. But not so.

The Pope, a Pole, became involved after Polish Australians beseeched him to seek celestial intervention to help teach Australians how to spell.
They also wanted help to put to right an insult to Poles everywhere and especially to a dead Polish hero.

The Holy Father on 1 January 1995, in a move described by Polish Australians as „an unequivocal and undeniable voice of support from His Holiness” instructed the Vatican to assure Australian Poles that their petition to the Holy See had been "carefully noted" and that „His Holiness will remember you in his prayers”.
The matter that got attention at St Peter's involved the last letter of the alphabet. It is used comparatively little in English but is fundamental to Polish and for decades has assumed historical proportions for many Australian Poles who became dedicated to its cause. 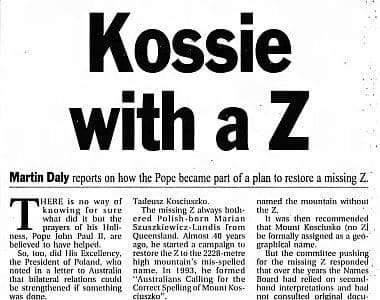 Two years after His Holiness offered prayers and - with help from Polish president Aleksander Kwasniewski, Gough Whitlam, David Malouf, Justice Michael Kirby, Nick Greiner, Thomas Keneally, Jennie George, the Polish ambassasdor to Australia, Dr Agnieszka Morowinska, an adviser to the Vatican, Jerzy Zubrzycki, Phillip Adams, Sir Ninian Stephen and many others - the Z is about to be put back into Koscius(z)ko.
The decision by New South Wales' Geographic Names Board to give Mount Kosciuszko its correct spelling also removed a veiled insult to another great Polish Australian, the explorer Sir Paul Edmund Strzelecki, who by implication was seen to be not able to spell, at least when it came to references to his hero, the Polish nobleman General Tadeusz Kosciuszko.

The missing Z always bothered Polish-born Marian Szuszkiewicz-Landis from Queensland. Almost 40 years ago, he started a campaign to restore the Z to the 2228-metre high mountain's mis-spelled name. In 1993, he formed „Australians Calling for the Correct Spelling of Mount Kosciuszko”.

A MOUNTAIN OF SUPPORT
————————————
„You can be assured of my complete support for your aims”.
- Gough Whitlam - 21st Prime Minister of Australia.
——————
„If we are proud to be a multicultural nation we should at least get our spelling right.”
- Sir Ninian Stephen-Governor-General of Australia.
——————
„The correct spelling and pronouncing of the names of Tadeusz Kosciuszko and Paul Strzelecki is not only accurate but elegant … contributes to the development of friendship between Australia and Poland.”
- Dr Grzegorz Pienkowski, Consul-General of Poland.
——————
„I am directed to acknowledge the letter and enclosures which you sent to the Holy Father and I would assure you that the contents have been carefully noted. His Holiness will remember you in his prayers.”
- The Vatican.

With considerable help from his daughter Christiana Landis and others dedicated to giving the Z its rightful place in Kosciuszko, Szuszkiewicz-Landis and his committee proved that not only did Strzelecki correctly spell the name of the peak in naming it after Kosciuszko, but that some of the documents on which NSW authorities based their claim he had not used a Z had contained the Z all along.

On 5 February 1840, Strzelecki became the first European to reach the mountain's peak. He named it after Kosciuszko, who had fought in various campaigns, including the American War of Independence, and led the Polish revolt against Russia.
On 1 August 1840, Strzelecki wrote to a woman friend, Adyna Turno, in Poland and twice referred to „Mt Kosciuszko” with an Z.

Strzelecki also used the Z in maps and it was also used in his biography. These factors were used by Szuszkiewicz-Landis's committee to prove Strzelecki correctly spelled the name of the great Polish patriot.
In 1974 the Names Board produced a two-page report on the mountain's name which referred to a paper by W. L. Havard which had been read before the Royal Australian Historical Society in 1939.

The board's report cited three extracts from letters from Strzelecki as they appeared in Havard's paper which said Strzelecki had named the mountain without the Z.
It was then recommended that Mount Kosciusko (no Z) be formally assigned as a geographical name.

But the committee pushing for the missing Z responded that over the years the Names Board had relied on second-hand interpretations and had not consulted original documents in support of its refusal to correct the misspelling.

The Kosciuszko Committee instigated a search to find original documents. It had them translated and presented to the board to show that any claims that the mountain's name now was as Strzelecki had intended were false because there was ample evidence, including documentary evidence in the Library of New South Wales that he had spelt the name with a Z.

The committee also found evidence which, it asserted, threw doubt on the authenticity of letters which historians claimed had been writted by Strzelecki.

The committee argued: „For unknown reasons, in unknown circumstances, and by unknown means, Australia's highest peak became known as Mount Kosciusko. It also became pronounced as Mount Cosi-osko.
The correct pronunciaton is Kosh-choosh-ko …
» It is most probable that deleting the Z was a deliberate action on the part of authorities at the time « .
The committee argued:
„That a literate scientist like Paul Edmund Strzelecki could accidentally mis-spell the name Kosciuszko is impossible.”

The dispute drew some predictable responses, such as: "to zee or not to zee, that is the question", from the New South Wales Land and Water Conservation Minister, Kim Yeadon, and „what's in a zee ”?
But this is no joking matter for Poles who argued to the Names Board that the omission of the Z had ramifications beyond a simple mis-spelling.

The proud name of General Kosciuszko, they said, had not only been „bastardised” but the misspelling meant that the honor of naming the mountain had, in effect, been taken away from Strzelecki. The mountain had become known in Australia and overseas, in textbooks, in maps and on road signs, by a name which Strzelecki did not give it.

„By deleting the letter Z, the connection between Kosciuszko and its cultural, historical, linguistic and national origins were severed by the swift stroke of a pen” the committee said.

The Kosciuszko affair could have been much worse, although Australian Poles would have had a reporter at the Port Phillip Herald to blame. A report on 23 June 1840 on Strzelecki's climb reported the name as „Koscuisko”, with the I and U transposed and without the Z.

The article comes from: The Age Melbourne, Victoria March 15, 1997
(We have an electronic version of the article)