A Magic Name In Gippsland by P.L.B

Who was Count Strzelecki? What was his background? Was his work in Australia important, or merely sensational?
Is there much to be learnt about him in Geoffrey Rawson's „The Count” ? (Heinemann, Australian price 27/6)
- Read also below 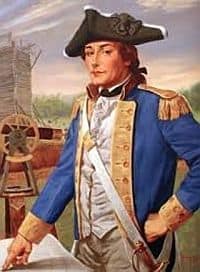 General Kosciuszko the Polish patiot, after whom Count Strzelecki named the highest peak in the Australian Alps.
Kosciuszko fought for the independence of America under Washington and also led a popular uprising of the Poles against in Russia.
He was ewentually defeated with overwhelmingly large forces. Wounded in battle he was taken prisoner to St. Petersburg and held in prison until the death of Catherine the Great.
With Kosciusko's fall the organised defence of Poland collapsed and the country ceased to exist as an independent nation.
On Ferbuary, 1840, Count Strzelecki ascended the highest peak in the Australian Alps, which he named Mount Kosciuszko.

WAS HE LIKE THE POLES who used to throng Princes Street, Edinburgh in the early months of the last war, impressive in their Polish service uniforms, each with an unusual story - in a word, dashing, but with a difference?

Who left their land, and lives and loves behind to challenge tyranny upon the risen wind.

The refugee habit, forced upon Poles by fate so long ago, makes Count Strzelecki suspect. We in Victoria know that he was not the first into Gippsland, yet named it, and got much credit for its discovery. It is a point of interest to us that the Scottish Sellar, whose farming methods he praises, was closely linked to some of our early settlers and that the lad James Riley, who accompanied him through the bush, was the great grandfather of cyclist Russell Mockridge.

But was Strzelecki's large volume a real contribution to knowledge, or did Pelion piled on Ossa baffle brains? His contemporaries thought, without doubt, that Sir Paul de Strzelecki, K.C.M.G., C.B., naturalised British subject, was rightly honoured. What has the latest writer (Rawson) got to say?

„The Count A Life of Sir Paul Edmund Strzelecki, K.C.M.G., Explorer and Scientist” (209 pp., plus index and preliminaries), has grown from an essay that was commended in the State literary competitions of 1951.

Rawson is an experienced author, who, beginning with studies of seamen, has already touched on aspects of Australian history. He brings to this book the inspiration of personal contact with Poland, sound judgment, and new material. He is imaginative without being fanciful, sympathetic but not emotional, and has been guided by the quotation that Strzelecki applied to himself:
„The duty really is, not to refute the experiments of others, not to show that they are erroneous, but to discover truth”.

We have an interesting, understanding, and essentially impartial account of Strzelecki's youth, of his exile - but not through politics in his late twenties, of his nine years' sojourn either in Britain or Europe, his span of five years in America and Oceania, his arrival at Sydney in 1839, his Australian explorations and relationships, his return to England; of his work during the Irish Famine, and of the London career that closed with his death as a septuagenarian in 1873.

The author also includes some 40 plates maps, photographs, and facsimiles - and at the end, a copy of Strzelecki's will.
The story is rounded off by two contributed papers, one on Strzelecki in Poland, the other about Mount Kosciusko so named by Strzelecki after the Polish hero and patriot (1746-1817).

The publishers claim that this is a „full-length biography”. But the pre-Australian period is covered in 40 pages, the post-Australian in 30. Owing to lack of material, and to the scope of the original essay, two - thirds of the book are devoted to Strzelecki's four years in Australia.
Within its restricted limits the book is well-balanced. The author concerns himself mainly with Strzelecki the man, his attributes and achievements, particularly his part in Gippsland history. He discusses this question fairly and at length, gives Angus McMillan, the Gippsland pioneer, an equal hearing, and performs a useful service by quoting McMillan records that were unavailable to the late A. W. Greig (Victorian Historical Magazine, 1912).

An illuminating addition has been made to the known material touching Strzelecki himself; a packet of letters in Warsaw, apparently seven or eight. They were sent by Paul Strzelecki to Adyna Turno, the girl of 15 with whom he tried to elope, the woman to whom he wrote for 40 years, the old lady whom at length he met, and from whom he parted.
In handling them and their contents, in dealing with Strzelecki the man and his evolution, the author is master of his subject.

These letters were written in French, but early examples of Strzelecki's easy English are included among the facsimiles. Then why repeat an old suggestion that he handed his notes on Gippsland to H. F. Gisborne because of the language barrier? And why call Henry Fysche Gisborne „Henry Francis” ?
Although thought and time and effort have gone to the work the book has the gloss of thoroughness without the reality. It is sprinkled with occasional defects that could have been easily avoided. According to all accounts, Strzelecki was born in June, 1797 (p. 3), when a photograph of his tombstone, published without annotation, shows 1796 (p. 189).

Or again, when, for instance, we come to the wreck of the Clonmel, which ran aground some 20 miles east of Corner Inlet, and the part it played in the Gippsland sequence, we need precision. „Somehow or other, news of her plight reached Port Phillip” is not enough.
What actually happened is shown in the „Port Phillip Gazette”. Captain Lewis, harbour master at Melbourne, picked up one of the Clonmels boats off the Heads, when returning in the cutter Sisters from King Island, and went to the site of the wreck as soon as possible. He brought back news of a sea approach to Gippsland that caused W. A. Brodribb and others to charter the Singapore in order to use it.

At first they tried the wrong entrance, but finally found the right one; then resumed contact with Melbourne, where Henry Dendy had arrived just after they left, exciting the town with his order for a special survey. The system seemed made to measure for the „Gippsland Company” but their reliance upon it left them stranded.
The surveys were long delayed; in spite of Strzelecki's and the „Port Phillip Herald's” optimism, it took three years to find an overland route from Melbourne. During that time the determined McMillan and his associates had established an export trade across Bass Strait.

Strzelecki's account of squatting and the depression of 1841-43 is quoted with commendation; but his analysis of collapse is topsy-turvy, and his canons of farming were not so much unfamiliar as incapable of application within the general framework. On the other hand, the author shows, through the expert opinion of a modern geologist that, as a scientific work, Strzelecki's „Physical Description of New South Wales and Van Dieman's Land” is a classic, still valuable for constant reference.

This opinion seems to be borrowed from W. L. Havard's biography, to which - as to other sources - more explicit acknowledgement might have been made.

The history is slightly blurred, but the figure that it surrounds is definite and well taken. Romantic and practical, energetic and ambitious, generous and highly gifted a stranger of resource and quality.

Published in the „The Age Literary Supplement” Melbourne 19 December / 1953.
See _fragment_ press article.
(We have an electronic version of the article.)