The Art Gallery of New South Wales is a proud owner of the numerous paintings, which show images of the Mount Kosciuszko mountain painted by Australian painters.
The mount itself gained much interest because it is the highest peak in Australia.
It was painted during different times of the year and from many different perspectives. Three of the paintings are the most interesting paintings of Mount Kosciuszko from the Art Gallery collection in Sydney, and the National Gallery of Australia.

The most beautiful is large (45 x 75 cm) oil on canvas „Mt. Kosciusko” by William Charles Piguent, painted in 1903.
Piguent was reputedly the first Australian–born professional artist. He was born in 1836 in Hobart, Tasmania as a son of the convict, Frederick Le Geyt Piguent and his wife Mary Ann, nee Igglesden.

For receiving government stores his father had been sentenced to transportation for fourteen years and arrived at Hobart on 1830. In 1836 Frederick was a clerk in the Convict Department and in 1842 received a free pardon.
Mary Ann, a girl of good family ran a school for young ladies Educated at Cambridge House Academy, William Charles received some lessons from Frank Dunnett, a Scottish painter, and was commended for his superior drawing, mapping and penmanship.

He began his career in 1850 as a draftsman in the Survey Office but most of his time he dedicated to painting romantic landscapes influenced by Turner. In 1875 Piguent settled with his family in Sydney.
He assisted in founding and contributing to exhibitions at the New South Wales Academy of Arts and held a one-man exhibition after this time.

In 1898 and 1900 Piguent visited Europe and his work was included in the exhibition of Australian Art at the Grafton Galleries in London and the Paris Salon. Unassuming and retiring, he shrank from controversy and quietly resigned from the Art Society of New South Wales when it split over the impressionist movement.

The first Australian-born artist of note, he delighted in mountain scenery and often chose dramatic subjects for his painting.
In 1901 one of his finest canvases, „Thunderstorm on the Darling” won the Wynne Prize, Sydney. He also won several gold medals for his careful and sensitive observation of nature.
In 1902 the New South Wales government commissioned him to paint Mount Kosciuszko for £175 and £25 expenses including a gold frame. Piguent wanted a different view to that traditionally painted and hired a local guide and they spent the best part of three weeks looking for „the most advantageous spot from which to illustrate the monarch of Australian mountains.”
Piguent made numerous pencil and watercolour sketches of the area and finally chose to paint Mount Kosciuszko from the north-east. The viewer is looking across a succession of ravines and the drama is increased by absence of foreground.
The mountain rises abruptly out of the picture frame surrounded by large swirling patches of mist as if inaccessible to man.

Piguent painted this picture using oils, and his brushstrokes of grasses are definite and confident. He built up the shape of the rocks with thickness of paint however the clouds are painted delicately and show luminosity. He also was able to achieve a kind of „high mountain atmosphere” like grandeur and ruggedness through bold brush strokes.
The artist painted this painting in spring time and the colours are fresh.

„Mt.Kosciusko” was his last major wilderness painting. Piguent imbued it with grandeur appropriate to its status as Australia’s highest mountain.
Piguent died in 1914 at Hunter's Hill unmarried and was buried in the Field of Mars cemetery.

Next noteworthy painting of the same theme is „Kosciusko” by Will (Sir John William) Ashton, which he painted in 1930 and he won the Wynne Prize for it.

Howard a journalist, critic and artist, was born in 1877 at Islington, London, eldest child of Julian Rossi Ashton and his first wife Eliza Ann. He reached Melbourne with his parents in 1878 and after five years the family moved to Sydney where Ashton attended Bondi Public School and Sydney Boys' High School.

He was „brought up in a Bohemian home”: his interests were musical, artistic and literary. In 1896-1903 he attended his father's art school where he met Mary Ethel Roberts, whom he married in 1908. 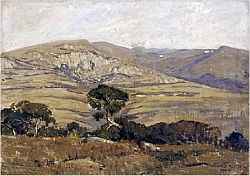 Ashton would have been a full-time artist but for the need to support his family.
He was a journalist for „The Sydney Morning Herald”, „The Daily Telegraph”, „Sunday Sun” and „Guardian”, „Art in Australia” and a few British magazines as well.

His earlier works in pastel and oil were fresh and poetic interpretations of sea and country-side, but a stilted realism characterized his later work. In 1938 he won the Sydney sesquicentenary prize for landscape. He was a Member of the Society of Artists and then Royal art Society of N.S.W.

He died in 1964, was cremated and his ashes were placed in a rock near his home. He was survived by a daughter and three sons of whom Cedric Howard is a noted cellist, and Julian Richard an artist and teacher. Ashton is represented in the New South Wales and Victorian State galleries.

The painting „Last of the trees, Kosciusko”, which is painted using oils shows the mountain from a long distance. The artist built its composition with surrounding mountains, with field in front and remaining „last trees”.
The colours of the painting are subdued.

Mount Kosciuszko had a great interest within Australian artists and as we can notice these three above mentioned paintings show an example of how different was an artistic vision of the mountain to them. From the very dramatic and fresh W.C.Piguent, „Mt Kosciusko”, through to the almost black and white Will Ashton, „Kosciusko” version, and then to the subdued „Last of the trees, Kosciusko” by Howard Ashton.