James Riley, a participant of the „Opening Gippsland ” expedition,
wrote to his mother in a letter dated: Melbourne  May - 30 - 1840

After traveling for three days, we came to a change of country — instead of fine open plains we came to thick forests and through that to dense brush, which entirely stopped our traveling on the plains and forced us to take to the ranges, which were little better, but we could cut and force our way through after great labour and exertion. 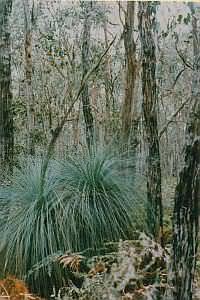 Through this scrub we forced our way for 14 days, during which time we made about 70 miles, so you may imagine we had difficulties to contend with, sometimes not making 3 miles in one direction, sometimes having to go 6 or 7 miles to head a creek, and after all to unload and carry everything over on our backs and then have to pull the horses out which get bogged — and at night to break a place down in the scrub before we could stretch our weary limbs, and to tie our poor horses to trees, without a mouthful for them to eat the whole night for fear of them straying away.

In this state of things we came to the conclusion of leaving the poor animals on the first spot we could find where they could get some subsistence, and for this purpose we descended again into the plain, and were fortunate enough to find a little grass and water not far distant.

We determined to leave them here, as they only delayed us, and that they were in such a state from starvation that it was madness to take them on, and leaving them here we had a chance some day of recovering them.

We were feeling the strain and were quite as exhausted as the horses. We had been on half rations for five weeks, two pounds of bread to three people per day, which when divided was but little to sustain life and strength, and for meat we had only two thin slices of bacon.

The Count fortunately succeeded in taking latitude observation, and from that we were (by Major Mitchell’s maps that were laid before the House of Commons) at about 25 miles to the NE point of the Harbour at Western Port to which we were steering, and which was about the spot where we supposed to find the old settlement — but by referring to the Navigation Book we found that some of principal points did not quite agree.
This made us a little doubtful of the Major’s map, but we hoped for the best. Instead of finding it 25 it proved 70 miles, and the scrub increasing upon us instead of growing better. It took 21 days instead of 7, from the day we left our horses till we arrived at Western Port on the 12th of this month.

At this time we had eight days’ provisions at the above mentioned rate. We took a day to arrange and stow away our saddles, & ect., in trees, and only taking what we absolutely required, such as a clean shirt, our blankets and guns. We left everything else that was not of the most importance (of course the instruments for observation we were forced to carry).

We made the remainder of the flour into three dampers, and each man had his half damper to carry. Of bacon we had enough for three days. We were never more than a day without food. In the country through which we passed there was but one animal, it is the size of a small dog, and lives in trees, it is called the monkey or native bear. These we procured sometimes by shooting, sometimes by the native climbing the trees after them. We ate them raw when we could not make a fire which was difficult because dry fuel was scarce.

Some convicts who had escaped from Van Diemen’s Land were occupying the buildings of the Corinella settlement of 1826 and which were abandoned a year or two later. They shared what food they had with us, and showed us the way to Messrs Massie and Anderson’s station (present Tooradin).