This magazine has been introduced as a rebirth of the original Western Port Times, published in Grantville from 1898 until 1908, by T. C. Monger, and from 1908 to August 1910 by the Sullivan Brothers, at which date the premise was destroyed in a fire and everything lost.
Below is a list of several articles reporting the unveiling of commemorative monuments on the southern route of P. E. Strzelecki's journey through Gippsland.
_More information_ about these monuments.

During the week-end Sir James Barrett and Messrs A. S. Kenyon, Jones, Allan, Hansford, and C. Daley paid a visit to Lang Lang in connection with celebrations at Corinella on Saturday next, December 11. These active members of the society have been afield since Thursday and, such is the advance in the times, by the aid of a couple of motor cars were able to follow practically the same route which took Strezlecki months to accomplish.
Over twenty cairns will be erected along the track this early explorer followed, and it only remains now for arrangements to be made for the erection of one at Corinella, where Strezlecki’s explorations ceased.
Those attending the centenary celebration at Corinella this week-end will be educated and interested in details that will be placed before them. Very possibly some of our readers have old-time letters or journals bearing on the early days. These could safely be entrusted to Mr A. W. Madge, of Lang Lang, for perusal with a view of public information.
/ read on at the top right -z.l.

Given fine weather, this picturesque little fishing village should be overrun with visitors and souvenir hunters on Saturday afternoon next, for are not the members of the Historical Society of Victoria gathering there in force and inviting you and all residents to join with them in celebrating the centenary of the landing effected there just 100 years ago, and only a few hours ahead of the French expedition, which had already annexed the neighboring island.
Settlement Point, as it was then called, has not expanded at all, but it certainly is worthy of some recognised landmark and official local record, and what it adds very considerably to its claim is the fact that Count Von Strezlecki, after wandering and exploring through the bush as far as Omeo, turned back and reached the coast at Corinella also.
This makes a two-fold claim, and it is hoped that at least a simple cairn with both these records officially inscribed thereon will be erected somewhere near the spot from which the last historic gun was removed and sent to Melbourne as a curiosity.

[Note: the usual modern spelling of Massey and Strezlecki / Strzleckie is Massie and Strzelecki. Secondly, the 1826 settlement was the second attempt, the first being 1803 at Sorrento – editor].

Corinella was not overcrowded on Saturday last when members of the Historical Society of Victoria assembled there to celebrate the centenary of the first attempt at settlement of Victoria. Unfortunately for Gippsland, Captain Wright, who was in charge of the expedition, was recalled to Sydney after 15 months of occupation and it was left for Batman and Fawkner to cross over from Van Diemen’s Land (Tasmania) and settle upon the bank of the Yarra. 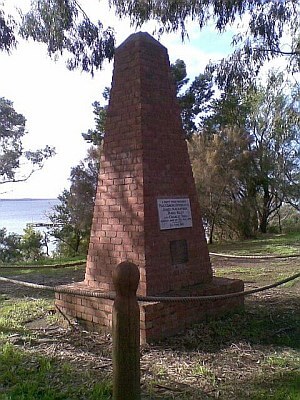 On the right — view from Settlement Point
overlooking on the Corinella piers.➜

However, the occasion of Saturday last was worthy of a more representative gathering, and a little information or a more formal function was surely warranted, for such names as Bass, Flinders, Hume, Hovell and Wright should not be allowed to sink into oblivion.
Strezlecki, also in 1840, reached the coast after two years’ wanderings in the then wilds of Gippsland at practically this spot, afterwards taking boat and landing at Tooradin.
In commemoration of both these events the historic committee is desirous of obtaining sufficient funds to erect a suitable cairn on the headland, which is a Government reserve adjacent to what was really the first house erected in Victoria; such a cairn to serve a two-fold purpose and carry both the inscription of the first settlement and of Count Von Strezlecki’s explorations.

Saturday’s gathering, at which was noticed a preponderance of Lang Lang residents, including Cr. F. Wildes, Messrs Cougle, L. Wildes, A. Orgill, Dalton, J. McMillan, A. W. Madge, and numerous lady friends, should prove but a forerunner of the celebrations in March next, when it is expected the Governor will be present and unveil the various cairns to be erected throughout the shires affected.

A party, including Sir James Barrett, the under-secretary for Lands (Mr. H. O. Allan), and members of the Historical Society committee left Melbourne yesterday for Gippsland, where they will unveil a series of cairns which have been erected to perpetuate the memory of the explorers Strzlecki and Angus McMillan, and to mark the routes of their chief explorations. The party will unveil several cairns each day…

His excellency the Governor (Lord Somers) completed on Saturday his tour of Gippsland, on which he followed the traces of the explorers Count Paul Strezlecki and Angus McMillan and unveiled cairns erected to their memory. Lord Somers began the tour on Monday at Benambra from which he followed McMillan’s route to the sea at Port Albert. He then returned to Bushy Park, near Maffra, and followed Strezlecki’s route to Westernport. The tour was a success in every way. Large crowds gathered at each of the cairns and Lord Somers said he was delighted by his first visit to Gippsland.
The tour on Saturday was begun at Korumburra, where a simple but impressive cairn has been built outside the town on a hill that commands a fine view. The shire president (Cr. F. Umbers) introduced Lord Somers, who addressed a large crowd that included pupils from all the district schools.
One party of children travelled 15 miles to the ceremony, and children from the township of Strezlecki were present in large numbers.
Lord Somers was the first vice-regal representative to visit Corinella. He was welcomed by the shire president (Cr. G. Hollins) and entertained at luncheon by the residents. Corinella is one of the most historic places in Victoria, for there, in 1826, the first settlement in Victoria was attempted. Strezlecki and his companions arrived at Massey and Anderson’s station at Westernport in an exhausted condition, without boots and their clothes in tatters. After recovering at the station they travelled to Melbourne.
Lord Somers was interested to meet Mrs Potts, a daughter of Mr Anderson, partner of Mr Massey.
After unveiling the cairn, which is inscribed with the names of Count Strezlecki, John Riley, and James McArthur who reached Corinella on May 12, 1840, Lord Somers returned to the city.
The secretary of the historical memorials committee (Mr C. Daley) announced that he had received letters of thanks from the Polish consul-general in Australia and Count Strezlecki’s grand-niece, Mrs Wanda Szalla. Mrs Szalla had asked for an account of the memorials tour for publication in Polish newspaper.