In his book „Physical Description of New South Wales and Van Diemen’s Land” (London, 1845) Strzelecki devotes pages 54 and 55 to a discussion of the Geological Map and Section which he had prepared and the symbols he had used to show variations in geology within major units (of rock and time).
He pointed out that the scales he had used (one fourth of an inch to 1 mile for both map and sections) had resulted in a very large map (25’ x 5’) and very long sections (26” x 3’ in all). The map and sections accompanying the book are naturally enough greatly reduced (actual sizes, map 23 1/2” x 7 1/2”, sections 17” x 6") and Strzelecki had perforce to generalize the geology for these.

Strzelecki plays a most important role in the history of Australian geology — his work is the ﬁrst attempt at a large scale synthesis of Eastern Australian geology, and his map the ﬁrst to cover a very large part of the continent (approximately 176,000 sq.m.) was compiled largely from personal inspection.
Because of this I have been looking for his original map for some years. Possible sources in Australia were soon eliminated, and it seemed likely that if still preserved it would be somewhere in Britain. 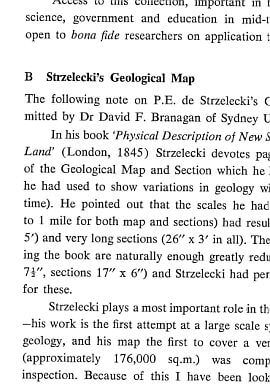 During 1972 while checking the early ﬁles of the Geological Survey of Great Britain, now part of the Institute of Geological Sciences and housed in the Library of that Institute at South Kensington, I came across several letters of and about Strzelecki.

On 3 December 1845 Strzelecki wrote to Sir Robert Peel offering his collection of Australian rocks and fossils to the Museum of Economic Geology which was under Henry De la Beche, for the sum of £200.
In the letter Strzelecki explained that during his ﬁve years of „residence and extensive travels in New South Wales and Van Dieman’s land” he had at considerable „expence in labour and money” acquired a „large collection of specimens of the Geology and Mineralogy of those countries”.

Strzelecki seems to have let the matter drop there and, as he became involved in other aﬂairs about this time, nothing was done. His original letter makes no mention of his map or sections.

Despite improved fortunes by 1849 Strzelecki still apparently wished to be rid of his Australian Collection. On 16 May 1849 he wrote to De la Beche oﬁering …
… „eight boxes of Fossils and Minerals illustrative of the »Phisical Description of New South Wales & V.D. Land« [and] also two Geological Maps of 22 feet long' which refer to it and which I have drawn while in Australia”.

On checking through the card index of maps held in the Institute Library I came across one labelled „Van Diemans Land and Adjacent Australian Coast 1850”.
On inspection this proved to be the Strzelecki map and sections complete with a large symbol chart. The ﬁgures had been cut into portions, mounted and boxed, apparently by Strzelecki himself.

A detailed discussion of the geological detail is out of place in this present note. All that need be said is that the original map will give a much better idea of the geology as Strzelecki saw it and clarify many of his ideas.
I propose to make this analysis in a separate paper. It should be pointed out that there are several sections which were not published by Strzelecki, including one from Bathurst to Sydney.

As a document of Australian scientiﬁc history it seemed important that a usable copy of the original should be available in Australia. The Institute was agreeable to copying the diagrams and I have thus been able to obtain a set of colour negatives (45 in all) and a comparable set of colour slides (3” x 4”). Enlargements of the negatives have enabled me to prepare a map and sections at about one quarter the original scale, but a satisfactory greater enlargement is possible.

I have not yet located Strzelecki’s collection of rocks and minerals. It has very probably „migrated” to the British Museum (Natural History), but a preliminary search there located nothing.

I am grateful to Miss J.M. Fitch, Assistant Librarian of the Institute of Geological Sciences, who helped me in my original search in the Library and who has organised the copying for me since my return to Australia.

A grant from the Edgeworth David Travelling Scholarship Fund of the University of Sydney enabled me to carry out the original search in London.

See what the _ book and the map _ attached to it look like.

[1] We would like to thank especially Rachel Armstrong - Archivist Basser Library and Fenner Archives - Australian Academy of Science for sending us an article by Dr. David F. Branagan and high quality map scans of P. E. Strzelecki.  _Return to top_

[2] The letters are from a copy book written by a single hand. Spelling errors such as ‘Dieman’s, „expence” and „phisical” cannot therefore be deﬁnitely attributed to Strzelecki.
_Back to top_