Sir Paul Edmund Strzelecki is known in Australians as the explorer who located and named Australia's highest mountain (Mt Kosciuszko - 2.228 m / 7,310 ft). He also made other important geographical and geological observations during his explorations of the south-eastern part of the Australian mainland and Tasmania. Although almost certainly not the first discoverer, he found gold well before the famous Australian gold rushes, and identified a number of other valuable minerals.

Strzelecki came to Australia in early 1839 after four and half years of traveling and exploring North and South America, Tahiti, Hawaii and New Zealand. He was warmly accepted by the colonial administrators of New South Wales and having some claim to an aristocratic background, was generally referred to as the Polish Count.

In 1840 Strzelecki made his famous expedition from Sydney to the Australian Alps. In company of James McArthur, he approached the main chain of mountains from the west and on the 11thof March singly climbed the highest peak, which he named after the great Polish patriot, Thaddeus Kosciuszko. He then traveled into Victoria and after reaching Melbourne and exploring parts of eastern Victoria crossed Bass Strait to visit and explore Van Diemen's Land (now Tasmania).

In 1842 returned to Sydney and explored the Hunter Valley region before to returned to Europe in 1843. He settled in England and in 1845 published a book entitled „Physical Description of New South Wales and Van Diemen's Land”, with an accompanying geological map.
This publication was a major contribution to the knowledge of the geography, geology, paleontology and other physical aspect of south - eastern Australia.
In the same year he became a naturalized British subject and in 1853 he was elected a fellow of the Royal Society and the Geological Society of London.
He undertook important humanitarian work and was awarded a number of British honours, including an honorary Doctorate of Civil Law from Oxford University and knighthood.
Strzelecki died in 1873 and was buried in Kensal Green cemetery in London. 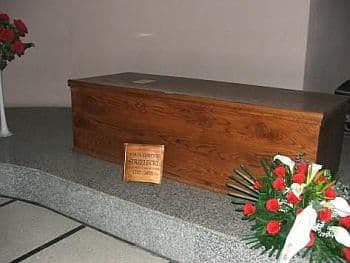 In 2001 David Branagan, one of my geological colleagues, visited Kensal Green cemetery to see the tomb of Strzelecki, only to discover him missing with information at the cemetery office indicating he had been „repatriated to Poland”.

On a trip to Poland in September 2002 I was fortunate to track down Strzelecki to Poznan. It appears that his remains were exhumed from Kensal Green in 1994 or 1995 at shipped back to Poland. They now rest (22 11.1997 - on the 167 anniversary of the November Uprising outbreak) in a splendid wooden coffin in the Crypt of Meritorious Citizens Greater-Poland (Krypta Zasłużonych Wielkopolan) beneath the church of St. Adalbert, in the old city section in Poznań.

This crypt has been set up to house the remains of a number of famous Poles who came from, or had connections with, the Poznań area and the Greater Poland Voivodeship (Strzelecki was born in Głuszyna near Poznań).
Strzelecki now lays next to the tomb of Jan Henryk Dąbrowski, the famous Polish general. Other nearby notables includes Józef Wybicki (who wrote the words for the Polish national anthem), Antoni „Amilkar” Kosiński (another general) and a number of composers, academics and priests. At the time of my visit, the crypt was being used for church services during renovations of the church above. Thus, al well as being in the company of the famous dead. Strzelecki was being regularly visited by the living.

My many thanks to Włodek Skwierawski, officer of the Central Administration of Greater Poland in Poznań and staff at the church of St. Wojciech for helping me locate and pay homage to the remains of this famous pioneer, explorer and geologist.