Strzelcki's will was contested by his Polish family in the London Court of Justice.
Here is a record of the proceedings. 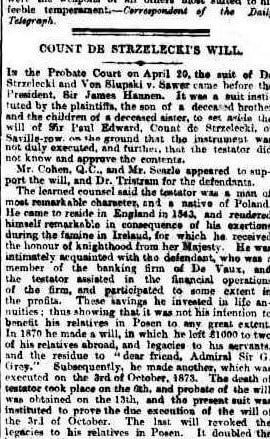 In the Probate Court on April 20, the suit of de Strzelecki and Von Slupski v. Sawer came before the President, Sir James Hannen.
It was a suit insti-tuted by the plaintiffs, the son of a deceased brother and the children of a deceased sister, to set aside the will of Sir Paul Edward, Count de Strzelecki, of Savillerow, on the ground that the instrument was not duly executed, and further, that the testator did not know and approve the contents.

Mr. Cohen, Q.C., and Mr. Searle appeared to support the will, and Dr. Tristram for the defendants.

The learned counsel said the testator was a man of most remarkable character, and a native of Poland. He came to reside in England in 1843, and rendered himself remarkable in consequence of his exertions during the famine in Ireland, for which he received the honour of knighthood fiom her Majesty. He was intimately acquainted with the defendant, who was a member of the banking firm of De Vaux, and the testator assisted in the financial operations of the firm, and participated to some extent in the profits.
These savings he invested in life an-nuities; thus showing that it was not his intention to benefit his relatives in Posen to any great extent.

In 1870 he made a will, in which he left £1000 to two of his relatives abroad, and legacies to his servants, and the residue to „dear friend, Admiral Sir G. Grey”.
Subsequently, he made another, which was executed on the 3rd of October, 1873. The death of testator took place on the 6th, and probate of the will was obtained on the 13th, and the present suit was instituted to prove the due execution of the will of the 3rd of October.

The last will revoked the legacies to his relatives in Posen. It doubled the legacies to his servants, and it constituted Mr. Sawer the sole residuary legatee. The testator had been visited to within a very short time prior to his death by Mr. Thomson Hankey, M.P. for Peterborough, and the Right Hon. W. E. Gladstone; and he should call the latter gentleman — who saw the testator on the very day the will was executed — who would state his opinion of the state of mind of the testator at that period.

The Right Hon. W. E. Gladstone was then sworn and examined by Mr. Cohen.
He said:  (read the box below)

„I knew the testator, Sir Paul Edward de Strzelecki for over twenty years. He was a remarkable man, of great information, of singularly wide experience, high character, much more than ordinarily so, of collected balance, and one of the most self-possessed men I have ever seen—much beyond the average of men in that respect”

We always looked on him as one of our young old men, and it was a great surprise to me to learn, the last time I saw him, that he was labouring under illness which proved mortal. I saw him on the 3rd of October.
On that occasion he appeared not only to be competent, but in the same balanced state of mind for which he had been remarkable all his life. If you wish I will refer to a conversation which I had with him, and which I entered in a kind of journal or diary I keep.

The conversation, however, made a deep impression on my memory. It was a retrospect of his past life; that he was well aware he was about to pass out of the world at peace with all men, and further, that he had considered the future he was entering. A short time prior to the discovery of his illness he contemplated with considerable pleasure a continental tour he proposed making. He had medical advice as to the state of his health prior to leaving town.
He (testator) received an excellent account of the state of his health. After that an internal disease manifested itself, which left no doubt as to the fatal issue; yet, notwithstanding that the testator was fully aware of the circumstance, he spoke without the slightest disturbance or excitement whatever.

Mr. Cohen: On the occasion that you last saw the testator did you consider him calm and collected and perfectly able to execute a will?
Mr. Gladstone : He was collected as you are your-self, sir, or, with submission, as his lordship on the Bench.

My impression is that it was late in the day when I saw the testator, as when in office I never was accustomed to make calls early in the day. He appeared to me to be a singularly generous and very kind-hearted man, but I must explain that he never admitted men to have an in-sight into his mind to discover that he was better than his neighbours.
But he was a remarkable man, moving about the world apparently like other men, but spending a very large income and time and thought for purposes of the highest benevolence.
He never told me any intentions as regarded his relatives in Russia, or matters connected with the testamentary disposition of their fortunes.
I saw him on the occasion I have spoken to for about half an hour. He was not then suffering from absolute pain. He was not supposed to be so near death as he in reality was. He never spoke to me about his relatives abroad.

The evidence of Mr. Thomson Hankey, M.P. for Peterborough, taken by commission, was read. It stated that at the time the will was dated the testator was, in the opinion of Mr. Hankey, in a perfectly collected and sound state of mind.
Mr. John Sawer said he was the defendant in the suit, and was senior partner in the firm of De Vaux. He had known Sir Paul for over thrity years. He transacted business for him in September, 1873, on his return from a visit to Mr Baring's, and again on the 10th of September an on the 2nd of October, and every day down to his death.

On the 2nd of October the testator told him he wished to make some alteration in a will he had already executed.

The testator afterwards gave him the alterations he desired, and the present will was accordingly drawn out and wards executed. It was attested by two of his clearks. After the will was executed he gave it to witness to take care of having ondorsed the envelope as contaning his last will ana testament.

He was perfectly competend to make a will at the time he put signatare to the instiument now in Count. He (witness) was told to bun the old will, which he according did. The testator died on tho 6 th of October.
The two clerks of Mr. Sawer said they affiixed thier signatures to tho will as attesting witnesers.

His lordship pronounced for the will, and the did so after having read the diary of the testator for the last three years, which contained eventhe entry ofthe last interview the testator had with Mr. Gladstone.
He gave the costs of the suit out oí the estate.