A Tale of Two Mountains.

The strong, relentless wind savages me as I balance on jagged giant granite boulders. Precariously arranged, the massive rocks are imposing and formidable. This mountaintop is truly intimidating but wildly exciting at the same time. 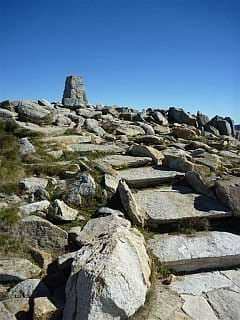 At 2209 metres above sea level, I am standing on the second highest point on the Australian mainland, the dramatic and spectacular Mt. Townsend.
Less than four kilometres due south is a very different, far more innocuous mountain. A benign rounded peak, devoid of danger and a mere 19 metres higher in altitude is the true highest point in Australia : Mt Kosciuszko, 2228 metres.

The history of these two mountains is fascinating yet mystifying. Since the nineteenth century, these noble peaks have been swathed in drama, heroism and controversy. Was Sir Paul Edmund Strzelecki really the first to ascend Mt. Kosciuszko in 1840?
Or was it actually Mt. Townsend he climbed?
Who were the other pioneers who made history on our two highest mountains?

Driving along the Monaro Highway from Canberra, one enters the unassuming town of Cooma, once headquarters of the Snowy Mountains Scheme, now the »gateway« to the Australian Alps.

Here the Tadeusz Kosciuszko Monument, a bicentennial gift from the Federal Council of Polish Associations, cherishes the Polish patriot after whom our highest mountain is named.
_See - check now_ cos2 cos2 cos2

The inscription on the Tadeusz Kosciuszko Monument simply reads:

Before the first European ascent

About an hour’s drive on from Cooma is the popular tourist-orientated lakeside town of Jindabyne, one of the highest settlements for its size in the country. It is impossible (and undesirable) to miss an imposing nine-metre-high, 3.2-tonne bronze statue of Strzelecki in Banjo Patterson Park.
Designed in Poland and transported to Australia at a total cost of $1.5 million, it is clear that the great explorer on which the statue is modelled left a strong, enduring legacy. The strident Strzelecki stands with one hand holding notes and maps, his other arm outstretched, pointing symbolically to the highest summit of Australia – Mt Kosciuszko.
This majestic monument’s plaque proudly proclaims: (Read right-bottom frameRead bottom)

While exploring in the Snowy Mountains region he discovered and climbed Mt Kosciuszko, which he named in honour of the Polish leader and patriot Tadeusz Kosciuszko.

And standing on the top of Mt. Kosciuszko, 172 years after Strzelecki, I read the new summit plaque that states:

It is highly unlikely that Strzelecki was the first person to climb Mt Kosciuszko.

Certainly the Ngarigo people from the Monaro land would have visited this region to feast on the nutritious bogong moths. James Cook must have been the first European to gain a cursory glance at Australian mountains along the Great Dividing Range in April 1770. However, being 160 kilometres from Mt Kosciuszko, he would have only seen the foothills of East Gippsland.

The unofficial first sighting of the Australian Alps is not certain but makes a quintessentially Australian story. In the tradition of a pirate – William Dampier – discovering the west coast of Australia, the man who first saw and named the Snowy Mountains was ex-convict Joseph Wild in 1820. Both Wild and Dampier did, at times, possess dubious reputations but somehow managed to redeem themselves by contributing to Australia’s exploration history.

In 1824, explorers Hume and Hovell were the first Europeans to formally and officially record a sighting of the Snowy Mountains. They wrote:
„We were suddenly surprised by a sight, to the utmost degree magnificent: Mountains of an immense height, and some part of them covered with snow”.

They were looking at the steep western face of the highest part of the Kosciuszko plateau. But the Townsend-Abbott mountain group obscures any view of Kosciuszko so it was unlikely that any European had glimpsed the highest peak at this stage.

While it is conceivable that stockmen could have climbed the Snowy Mountains in the 1830s, the first recorded account was by John Lhotsky.
He climbed and named Mt William IV, boldly claiming it „the highest point ever reached by any traveller in the Australian continent”.

Further investigation reveals this mountain to be Mt. Terrible (1855 m), about 13 kilometres southeast of Mt Kosciuszko. An absence of a journal makes authentication near impossible but Lhotsky was probably the first European to see (but not climb) the Kosciuszko summit. So while not being the first to ascend Mt Kosciuszko, Lhotsky did, in somewhat melodramatic style, name the iconic Snowy River:
„I flatter myself that I am the first writer introducing this river into geography”. 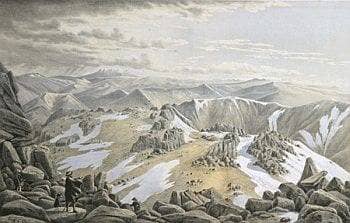 Local stockman Stewart Ryrie came close to being the first summiteer when he reached within four kilometres of the Kosciuszko summit, only 30 minutes riding time away.
Ryrie, who travelled almost 2500 kilometres of terrain in 1840 can at least be recognised for making the first official ascent of the Kosciuszko massif on 15 February that year. One month after that, Strzelecki completed his historic climb, summiting the highest peak on 12 March 1840.

Alan Andrews, an authority on Snowy Mountains history, states:
„Perhaps it was Strzelecki’s forthright and correct assumption, when he climbed and named Mt Kosciuszko a month later, that this was Australia’s highest mountain, that gave him deserved honour”.

Sir Paul Edmund Strzelecki explored 12 000 kilometres of land in NSW and Van Diemen’s Land but it is of course his ascent and subsequent naming of the highest mountain in Australia for which he is most renowned. His party consisted of grazier James Macarthur (who financed the trip at £500), James Riley, a young stockman, Aboriginal guide Charlie Tarra, and two convict servants.

After a laborious climb, Strzelecki’s party reached a mountain summit. But as Macarthur’s journal attests, it was not yet the highest point. It is likely they were standing on Mt Townsend.
„We found the actual summit divided into six or more points”.

Macarthur wrote:
„The Count by aid of his instruments quickly detected one of them as being in fact considerably higher than where we stood. A deep ravine separating us from this did not deter my adventurous friend, he determined to reach it”.