A majestic but little visited Victorian rainforest is the remnant of a more forested past.

Walking into the park it becomes obvious that you are about to embark on an environmental experience.
Many different species of ferns, coupled with an incredible diversity of birdlife, includimg the elusive lyrebird, make this park their home. The park is also haven for wildlife such as the kangaroo, wallaby, possum and the ever-shy platypus.

The rainforest at the roadside appears impenetrable, a wall of rampant vegetation. Lyrebirds shoot from its cover like cannonballs, running the road as though it's a game. At night, wombats play the same game, only at their own laconic, carefree speed.

For 20 kilometres the rainforest of the Tarra Bulga National Park almost devours the road, its falling leaves and twigs knocking at the car roof like an angry mob.

Bark strips drape from overhanging branches like woody stalactites. It is a lush counterpoint to the deforested slopes of the Strzelecki Ranges I have driven through to get here, and it is the final remnant of a vast forest that once covered the ranges and defied the eponymous explorer „Count” Paul Strzelecki in 1840.

„On some days they toiled hard to cover a mile or so. They had to force their way up and down steep hills clothed thickly with large timber and undergrowth.”

…one book later described this part of Strzelecki's journey. Koala became the principal element of his party's diet.
Strzelecki was not the first European into the region - that honour belonged to Angus McMillan the previous year - but it was his name that lingered over the ranges.

Following his exploration of the high country, which included the discovery of Mount Kosciuszko, he continued south into these mountains that stopped him like a road block.

Viewing the forest's bulk from the window of the car, or on foot along the park's compact network of trails, it is easy to sympathies, if not empathies, with his plight.

At the eastern end of the Strzelecki Ranges, south of Traralgon, Tarra Bulga provides a glimpse of Gippsland as Strzelecki would have seen it, coated in the cool temperate rainforest that is now confined to four places in Victoria: Tarra Bulga, the Otway Ranges, the Errinundra Plateau and the central highlands between Warburton and Marysville.

It is a park not known to many but seen by most, with its suspension bridge - an eye into a ferny gully - becoming an icon of Victorian tourism campaigns. 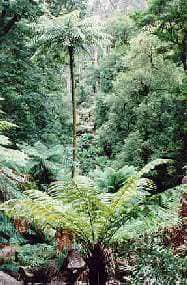 The park had its origins exactly 100 years ago when the Alberton Shire Council requested that the fern gullies near Balook be given the protection of the state government. A year later 20 hectares were reserved as the Bulga National Park, named for an Aboriginal word meaning „mountain”.

Five years later a slice of land along nearby Tarra valley (named for Charlie Tarra, the Aboriginal guide with Strzelecki's party) was protected as a separate park. In 1986 the two parks were joined as the small Tarra Bulga National Park.

Inside the 1625-hectare park, mountain ash (Eucalyptus regnans), the world's tallest hardwood tree, pierces the canopy (Tarra Bulga's mountain ash are thought to be among the oldest in the state). Ferns with fronds like starfish form a low secondary canopy with short walking trails winding beneath their open umbrellas along mossy, slow-moving creeks.

Lyrebirds mock nature from the safety of the forest and parrots flash through the sky. I search the canopy for sight of koalas but see nothing. Who can blame them for being shy?

There is a bush walk to suit everyone: