„Count” Paul Strzelecki
The enigmatic early explorer, whose name lives on in Gippsland.

.An edited account of the relevant Strzelecki history, and his eventual and recent, subsequent reburial in his native Poland.
The original and complete account by courtesy Mr. Barry Sykes.

S trzelecki arrived in Sydney on the French barque Justine, on 25th April 1839. Strzelecki’s claim that he was an accomplished explorer and geologist; and keen to undertake exploratory tasks, persuaded James McArthur to appoint him as leader of his proposed expedition to discover new lands.

From a subsequent report, Geoffrey Rawson in „The Count” quotes McArthur with:
„My party consisted of Count Strzelecki, James Riley Esq, and myself, accompanied by our two servants and my aboriginal black fellow Charlie Tarra, who came from Traralga near Goulbum Plains. The entire outfit of the expedition was borne principally by me, and cost me upwards of £500.”

As the years have proven, and as Hal Porter commented in his excellent book ‘Bairnsdale - Portrait of an Australian Country Town’; at that time Strzelecki had neither the title, nor the qualifications that he claimed. However, from his writings, it would seem that whilst others referred to him as „Count” he himself didn’t - one of the enigmas of Strzelecki’s character.

Jean Court, in her piece entitled,
„Sir Paul Edmond Strzelecki C.B.; K.C.M.G.; F R.G.S.” in the Gippsland Heritage Journal-, Vol.2 No 3 of 1988, offers the alternative claim that Strzelecki had previously advised friends that he intended to visit Port Philip in May 1840 anyway, and this expedition was merely a means to an end for him. 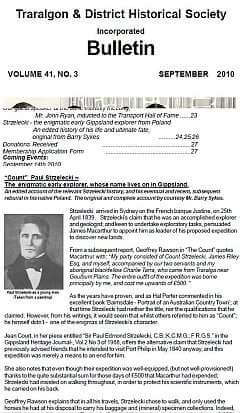 She also notes that even though their expedition was well-equipped, (but not well-provisioned!) thanks to the quite substantial sum for those days of £ 500 that McArthur had expended; Strzelecki had insisted on walking throughout, in order to protect his scientific instruments, which he carried on his back.

Geoffrey Rawson explains that in all his travels, Strzelecki chose to walk, and only used the horses he had at his disposal to carry his baggage and (mineral) specimen collections. Indeed, on his later expeditions around Tasmania, Strzelecki is calculated to have trudged some 2,000 miles (3.200km).

Rawson continues:
„Those instruments which he required for present and ready use, the Count carried on his back. They included Schmalcader’s three-and-a-half-inch reflecting compass in conjunction with a clinometer, a chronometer, a full size sextant, artificial horizon, a Gay-Lussac mountain barometer, hygrometer, thermometer, and apparatus for soil and water analysis weight approximately 20 kg.”

Strzelecki and McArthur set out from Numbla Munjee (now Ensay), in March 1840, for Corner Inlet.

They lost their directions for some reason, and as a result, near present-day Boolarra, they finally realized that Corner Inlet was nowhere to be found. As well, the expedition members and their horses were all becoming exhausted, so they decided to abandon their horses and gear, including Strzelecki’s collection of (geological) specimens, and make a cross-country dash for Western Port Bay, where they knew the settlement had been previously set up.

They had a really miserable time of it, due to the wet, dark and impenetrable rainforest that clothed the South Gippsland hills.

On top of this was Strzelecki’s insistence on travelling in a straight line regardless, which to us today is quite a bizarre proposition. As well, Strzelecki calculated that it was only a week’s march from Boolarra to Westernport, when in fact it took them three.
Because their meagre rations had run out, it was only the bushcraft skills of Charlie Tarra (as recorded by James Riley above), who had caught and killed koalas, that kept their party alive. They had to eat them raw, because they couldn’t light a fire of any sort due to everything being so wet. This meagre sustenance enabled them to struggle half-dead out of the bush near Corinella.

More careful examinations of Strzelecki and his travails in Gippsland in recent times reveal that whilst he could not be described as a competent explorer, his PR skills would be the envy of today’s politicians. It is only now, 160 or so years after McArthur’s muddled expedition passed through Gippsland, that scholarly research has begun to unravel the myths that Paul Edmund Strzelecki Esq. built up around himself and his exploits. (It will be some time yet before these are all seen in their true light, and finally dispelled.)

As a postscript, their party finally arrived in Melbourne with the great fanfare that Strzelecki craved, on 19th May 1840. In 1843 he departed Sydney for London via China. After his arrival back in England following his „sojourns in the Colonies, and places unknown to Europeans”, as Strzelecki described them, he applied himself to several humanitarian causes, with Carolyn Chisholm and Charles Dickens. By this time Strzelecki had become an ardent Anglophile, and as a result in 1845 took out British citizenship. The British Government was so impressed by his work in Ireland that on his return he was knighted „For services to the British Empire.”

He died in his sleep in London on 6th October 1873; and in complete contrast to his flamboyant and peripatetic life, his wish was to be buried in an unmarked grave.
A postscript to this, is that during World War Two, the area in which his grave was located was badly damaged by bombing, and later as part of the repairs, a plaque was placed on it, sponsored by the Australian and Polish Governments.