A note on Count Strzelecki's
visit to Hawaii

Paweł E. de Strzelecki's visit to Hawaii's Big Island and Oahu represents an interesting episode in the history of Polish-Hawaiian relations as well as in the history of early European explorations of the former mid-Pacific kingdom.

He was born in Głuszyna near Poznan, Prussian Poland, on July 20, 1797 and died in London, England, on October 10, 1873. His Polish name was „Count” [1] Paweł Edmund Strzelecki, but after becoming a naturalized British subject in 1845 he was also known as Sir Paul Edmund de Strzelecki. Thus, he might be equally well claimed by two nations, Poland and Great Britain.

Strzelecki is mostly remembered for his explorations of Eastern Australia and Tasmania which resulted in the discovery of gold [2], although according to the wishes of the Australian colonial government he kept his discovery a secret.[3]. Therefore, he never received full credit for his discovery. But for this polish nobleman the word of honour given to Governor Gipps meant more than passing fame. In the United Kingdom and in the Irish republic he is also known for his humanitarian services rendered to the starving Irish people during the Great Famine in Ireland as Chairman of the relief committee.

Strzelecki's scientific and civic achievements earned many honours of which the most important were: a fellowship of the Royal Society, the honorary D.C.L degree from Oxford University, a companionship of the Order of the Bath, and Knight Commandership of the Order of St. George and St. Michael.

Prior to his arrival in Hawaii, known at that time as the Sandwich Islands, Strzelecki had already distinguished himself as a successful explorer in Canada, the United States of America, Mexico and in a score of South American countries. His main attention was focused on the study of soil and climatic conditions, but he also expressed a scholarly interest in the life and social organisation of American and Mexican Indian tribes
We many also add that at the end of his stay in the United States he was cordially received in Washington by President Andrew Jackson.

Altogether he spent five years (1832-1837) in North and South America and some of his most interesting observations were published in the footnotes of his classic book on the geography, geology and weather of New South Wales and Tasmania.[4]

Strzelecki came to the Sandwich Island in the summer of 1838 on board the H.M.S. Fly from Valparaiso, Chile, where he was invited to join the expedition of Capitan Russell to the Marquesas, the Sandwich and the Friendly Islands. His trip to the pacific was a part of his great voyage around the world, an idea he conveyed early in his youth.
His desire to come to Hawaii was probably triggered by his special interest in mineralogy and vulcanology. It is easy to assume that he was mainly attracted by the world's largest active volcano, Kilauea, which he latter referred to as „Kirauea”, according to the orthography of his time. His preoccupation with that volcano is best manifested by the fact that he wrote a newspaper article and a scholarly paper on that topic.
His newspaper report was originally published in „The Hawaiian Spectator ”(vol. I (1838), October, pp. 434-437). [5] 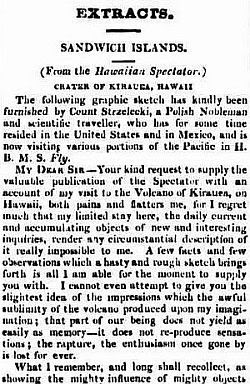 This article was followed by a more scientific and less impressionistic account of the crater which appeared in the „Tasmanian Journal of Natural Sciences, Agriculture, Statistic ect.” (vol. II, 1848, pp.34-41) under the article „Crater of Kirauea, Hawaii”.

The fact that he incorporated this account into his above mentioned work would indicate that the author considered it as quite an important contribution to science.
It is proper to stress that already in his newspaper article Strzelecki publicly admitted that he was very impressed with the site and dimensions of Kilauea, stating:

Having visited most of the European and American volcano's, I find the greatest of them inferior to Kirauea Crater in intensity, grandeur, and extend or area.

He is also credited with the introduction to world vulcanology of the Hawaiian word ale mau mau [6] in reference to the burning lava reservoirs. This word is now commonly used by all volcanologists who seldom realize how it entered their professional vocabulary. Strzelecki described the word ale mau mau in his first report on Kilauea as the „great Whole of the volcano” into which
„the bones of the former high chiefs were consigned - the sacrifices to the goddess Pele offered” and as
„the abyss of abysses; the caldron of caldrons - exhibiting the most frightful lava.”

Speaking about the volcano itself he called it
„the horrible laboratory” full of „terrific noise of a lava more infernal than earthly” and
„a mighty engine of nature” which makes us think of the „nothingness of man”
Strzelecki, besides giving a horrifying but vivid description of the world's most spectacular volcano did not fail to observe the impact of this unusual creation of nature on the religious beliefs of the Hawaiian people.

He especially advanced this idea in his second account of Kilauea published in his book and in a Tasmanian journal. He correlated the origin of the native cult of the goddess Pelé to the disastrous force of the volcano attested by man who
„in his primitive state, can only see his littleness, his nothingness” and fell
„the presence of an invincible and angry Power, whom he must appease, and conciliate, and render propitious.”

Strzelecki also added that to the largest of the volcano's six reservoirs, called Hau-mau-mau [7] by the natives, the terrified people make their way with „prayers and offerings” also consigning to it
„the bones of high priests, distinguished chiefs, and of those who have served well their country, and so mingle with the element of the goddess whom they revere, there mains of those she has cherished in their life time.” [8]

The above statement suggests that Strzelecki concentrated his attention not only on the spiritual life of the native Hawaiian population.
Perhaps in view of this statement we can better understand the warm reception he received during his two month visit to Hawaii. [9]
An echo of this reception survived in the from of a nostalgic remark which was made by the Sandwich Islands Gazette & Journal of Commerce of October 6, 1838, on the occasion of Strzelecki departure.

The distinguished nobleman - son of an illustrious but fallen nation, - who briefly touched these shores as a passenger on board be among the last whose memory will be unwept - unsung - at Oahu.

This lofty remark was perhaps one of the greatest sings of recognition which Strzelecki ever received in his adventurous and colourful life. It is also a pity that the Honolulu newspaper's prediction has never come true and the centennial of his death in 1873 went by unnoticed on this island. [10]

Continuation of the next page _ can be found here _ …