When an author inteds to write the biography of a prominent person of the past, he thereby engages himself in a work belonging to historical science.
In such a case the foremost qualities expected of him are:
1.) impartiality;
2.) faithfulness and
3.) clarity of exposition of the theme and period described. Strangely enough, in this book, the author seems, consciously or unconsciously, to break these rules.

1.) In the very title of the book „In a Dark Glass” we can see that we should not expect IMPARTIALITY and reading only tends to confirm this, because the life depicted so as to give a darkened image of the man, and not the true one.

2.) Many historically accepted facts from biograpress by eminet, writers and scholars (G. Rawson, W Słabczyński, W. L. Havarg and others) are ignored, or simply dismissed by the author without justifiable rounds for doing so.

3.) The book does not shed any new light on some less known periods of Strzelecki's live, and fails to fill the gaps inti, which likewise has not been done by other writes. 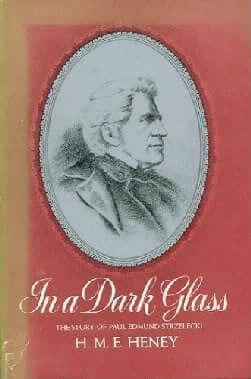 The good name of Sir Paul Strzelecki is well established in the literature of the English language. Recently, the works of the noted Polish historian, Mr. Wacław Słabczyński (whom Miss Heney frequently quotes) have thrown more light on Strzelecki, for, as Director of the National Library in Warsaw Mr. Słabczyński has access to a number of documents and information otherwise unobtainable.
His scholarly written books „Paul Edmund Strzelecki” and „Selected Writings of P. Strzelecki” provide more biographical material than that so far offered by other writes, including Miss Heney.

And his picture of Strzelecki in the light of the latter's correspondence and relationship with others (as we can see from „Selected Writings… ”) is still more clear and positive than even that in the excellent work - „The Count a Life of Sir Paul Edmund Strzelecki” by Geoffrey Rawson.
Miss Heney undoubtedly also collected a considerable amount of material for her book, although nothing of a documentary nature which is not known to Mr. Słabczyński. However, it is her interpretation and conclusions which create doubts and sometimes regret in an impartial reader.
For it seem, that every possible angle, she really tries to see the figure of the famous explorer and philanthropist in her „dark glass”. Only in cases which leave no room for doubt in interpretation, as for example, Strzelecki's admirable activities in Ireland during the time of the terrible famine of 1847-48, does the author do him justice.

The facts speak for themselves Although a penniless stranger in that rigid, conservative and even snobbish Victorian era in England. Strzelecki was able to raise himself to his prominent status in British high society, gaining exceptional honours and orders, while making innumerable eminent friends, and to finish his long and blameless life in his adopted country in a bright aura of general admiration and respect.

We know that the exclusive Victorian Society would not Accent much less honour anyone, who really did not furnish strong proof of his high moral and intellectual worth, as was the case with Strzelecki. Membership of the Royal Geographical Society and the Royal Society, D. L. degrees from Oxford University, a knighthood and orders of the Bath, St Michael and St George were the visible signs of recognition of his work for the Empire, and they were not bestowed for nothing.
This is not the place to enumerate and to quote all the excellent references, correspondence and opinions of highly placed persons of his time, as those who are interested can study the existing literature about Strzelecki for themselves.