History of Construction of the Statue

The statue of Strzelecki was Poland’s gift for Australia’s 1988 Bicentennial celebrations. The initiator of the project in 1980 was Harry Hefka.

He formed the Sir Paul Edmund Strzelecki Monument Committee in 1983 with John Molski and others under the patronage of Senator Tony Mulvihill.
Enthusiastic support for the idea came from authorities in Strzelecki’s hometown of Poznan. 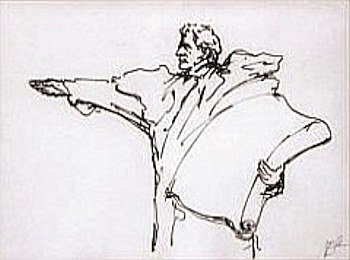 ⇑ ⇑ Click in a photo. Strzelecki's monument by Lake Jindabyne - J. Sobociński sketch for the design.
⇐ Click the cursor in a photo.

Sculptor, Jerzy Sobocinski, was commissioned to design and build the statue and granite pedestal in Poland.
When finished, it was delivered to Australia at a total cost of $US1,500,000, paid by the people of Poland.
The Committee campaigned to get the „go ahead” in Australia, and in March 1988, the NSW Bicentennial Authority approved a grant of $45,000. It was matched by funds raised by the Committee from the Australian community. This funded the construction of the scenic viewing platform and installation of the statue at Banjo Paterson Park, Jindabyne.

The site was generously provided by the Snowy River Shire Council. The Council eagerly approved the project in October 1987 with the cooperation and support of the Jindabyne Chamber of Commerce, The Snowy Mountains Authority and the Lions Club.
Dr John Ivering (also Polish) donated his time and talent to design and engineer the scenic viewing platform and plan the assembly of the monument.

At this stage, a new Committee under the Chairmanship of Robert Strang was formed, based on the Australian Polish Chamber of Commerce in Melbourne.
It raised further funds from the business community; arranged contractors for the construction work; supervised and coordinated the work to bring the project to completion.
Individuals, businesses and organisations that donated large sums to either the original Committee or the new one are recognised on the commemorative plaque on the monument.
Michael Kordek made a substantial donation and freely covered the project in his newspaper.

The Unveiling of the Statue

Speeches were given and the Duntroon Military College Band gave a recital with the 1st Kosciuszko Scout Group being responsible for raising the flags.
Hundreds of children from Jindabyne Central School joined the onlookers to witness the official unveiling of the Monument by the Governor of NSW.

Some Quick Facts about the Strzelecki Monument

Sir Paul Edmund Strzelecki is presented as a standing figure, with one hand holding notes and maps, his other arm is outstretched, pointing symbolically to the highest summit of Australia - Mt Kosciuszko. 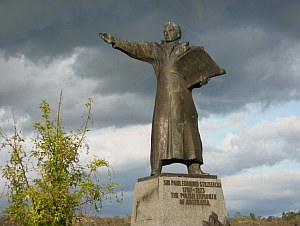 The statue is made of bronze weighing 3200 kg and is over 4 metres in height. The pedestal is made of 12 granite sections sourced from Lower Silesia in Poland, and together with the base, it is about 5 metres in height.
The attached bronze information plates weigh 1200kg. Total height of the monument is about 9 metres. The scenic viewing platform is made of Australia granite, although the exact source is not known at the moment.

Maintenance of the Statue is the responsibility of Snowy River Shire Council.

Designer/Architect of the Statue

Significance of the Monument

The Statue is a prominent feature in the Jindabyne town park, Banjo Paterson Park, standing proudly on a solid podium erected on a grassed area adjacent to Kosciuszko Road, on the foreshore of the picturesque Lake Jindabyne.
The Statue is impossible to miss as one enters the town of Jindabyne, at the foothills of the Snowy Mountains and Kosciuszko National Park.
Sir Paul Edmund Strzelecki and his Monument in Jindabyne, have been the inspiration for many poems and songs about freedom, strength of character, and the pursuit of knowledge, expressed through various events organised by both the local Australian and Polish community.

The Statue is a listed Heritage item in the Local Environmental Plan for Snowy River Shire, and entered on the NSW Heritage Database as having both local and international significance.

„ Everyone began to realise that Australian history wasn’t only Anglo-Saxons, and it was obvious everyone was aware that it was a time to update Australian history.
And I mean that with our composition now, to realise that, I repeat, Poles, Italians, Yugoslavs were entitled to figure more prominently than they had in the past.”
(…)
from the speech given by Senator Tony Mulvihill, energetic and effective Project campaigner and Patron of the original Sir Paul Edmund Strzelecki Committee.