Von Guérard began exhibiting in Australia in 1854. In October 1862, he accompanied Professor von Neumayer on a survey of north-west Victoria and Mount Kosciuszko, NSW; the figures in this print include both men, as well as two guides and a servant, as they were at the scene on 19 November 1862 (as dated in the published version)

Eugene (Eugen) von Guérard was born in Vienna, the son of a successful miniature painter. Eugene travelled to Italy with his father at the age of fifteen and received training in Rome. 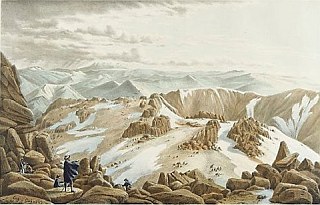 Sketchbook drawings of the mountain (in the State Library of NSW) led to a large oil on canvas, 66.5x116.8 cm painting „View from Mount Kosciusko” (1863), now in the National Gallery of Australia.

When von Guerard finished the painting in 1863 initial responses to it were markedly different. Its reception by local critics was largely negative and it remained unsold for a decade in Australia, prompting von Guerard to send it overseas. This was a tipping point in von Guerard's standing in colonial Victoria: the start of a sharp decline in his artistic reputation. It also may have damaged his art as he struggled with the rejection of a painting that he must have known was one of his most ambitious and powerful.

In 1867-68, Hamel and Ferguson published von Guérard's „Australian Landscapes” in Melbourne, although they do appear to have issued individual copies of the prints as early as 1866 (but probably not the full series), when a number were awarded first prize at the 1866 Intercolonial Exhibition, Melbourne.

Contemporary reviews suggest that this print from the summit of Mount Kosciuszko was from a second series of von Guérard's views, after his 1863 painting. Copies of the book were also produced with tinted or black and white illustrations. Von Guérard supervized the transferring of the drawings to stone for printing, and the colouring of the prints. A copy, coloured by von Guérard as a guide for the publisher's colourists, is now in the collection of the National Library of Australia.

Having made 10 sketching expeditions since 1855, he was delighted to have the opportunity to visit Mt Kosciuszko with German scientist Georg von Neumayer. When he returned to Melbourne in late December 1862, he immediately began turning the most exciting subject he had sketched into North-east view from the northern top of Mount Kosciusko, in fact a view from the peak now known as Mt Townsend, which von Guerard thought of as Kosciuszko's northern top.

Von Guerard set out for Mt Kosciuszko with particularly high hopes, expecting that the paintings produced as a result of the expedition would be of „Australian national interest”
His practice, like many other landscape painters in the early and mid-19th century, was to introduce small anonymous figures, known as staffage, into his landscapes, to humanise the scene and give scale to the waterfalls, giant trees and imposing mountain peaks so often depicted.

Mount Kosciusko was different. The two men in the bottom left of the painting are clearly not staffage, as they already appear in a drawing done on the spot by von Guerard in his pocket sketchbook. These men are Neumayer and his assistant Edward Brinkmann, whom von Guerard depicted taking barometric readings.
There were two guides in the party, John Twynham and a Mr Weston. The dog was Neumayer's, called Hector.

The cape-clad figure who looks across the snow-covered mountain ranges with hand outstretched, the most dramatic figure to appear in any of von Guerard's landscapes, was almost certainly a self-portrait, expressing his excitement and wonder.
This autobiographical element is apparent from how he inscribed the painting. He emphasised that it was a painting not just of a place but of a day, November 19, 1862, that was of particular importance to him. It was his 51st birthday, which the five men celebrated when they stopped for lunch.
It was also the day von Guerard had the greatest sense of putting himself in jeopardy for his art.
As Neumayer chronicled, the weather was bad from the outset: initially threatening, then becoming unsettled, including occasional showers.

When they reached the summit of Mt Townsend at 1pm, the wind was very strong and conditions rapidly deteriorated as von Guerard immersed himself in recording the topography and Neumayer began making scientific measurements, seemingly oblivious to what was occurring.
When von Guerard realised the danger at about 2pm and called out "that a heavy storm was approaching from the NSW side", their situation was particularly bad because they did not have all their equipment with them and so had to return to their camp, 11km away, a disastrous journey.

Von Guerard, the oldest member of the party, must have wondered through these events what he was doing venturing into such terrain. Most likely, his own mortality loomed large, making Mount Kosciusko all the more significant for him. The sublime landscape was for him not just an awe-inspiring scene but a profoundly frightening place.

Mount Kosciusko is one of von Guerard's most inventive paintings. He followed his usual practice of depicting the middle ground and distance with great exactitude, but he always felt at much more liberty in constructing his foregrounds and in this picture went furthest when he invented the extraordinary rock pile that runs down the left-hand side of the canvas.
In doing so, he not only created a remarkable link between foreground and sky but also added profoundly to the sublimity and grandeur of his subject.

Having found Mt Townsend to be "the grandest, the loftiest, and the most imposing of all the mountain crags which constitute the Australian alps", von Guerard was happy to engage in artistic licence to make it look even more sublime.
Von Guerard began by showing Mount Kosciusko in April 1863 in Wilkie and Webster's music shop, one of Melbourne's regular showplaces for paintings, and that August sent it to an exhibition of art and science in Ballarat. 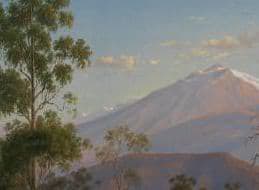 The Age greeted it as:
„a picture not merely of striking artistic merit, but very remarkable as a representation of nature in one of her grandest productions under an Australian sky.”
But The Illustrated Melbourne Post was quick to declare that, when von Guerard
„ gets up among the snow of Mt Kosciuszko, his skill seems to desert him; his drawing is hard, and his colouring raw.”

Von Guerard was soon falling out of favour with what for him must have been shocking speed, just as other painters were receiving much greater critical acclaim and having their reputations reinforced by the purchase of their works for the National Gallery of Victoria.
The first was Nicholas Chevalier who, having been overshadowed by von Guerard since the mid-1850's, was treated briefly as his equal, then eclipsed him. The second was Louis Buvelot, who arrived in Melbourne in 1865 and was soon being acclaimed as Victoria's finest painter.

The new hierarchy among Melbourne's artists was patent when, with Mount Kosciusko still unsold, von Guerard showed it again at Melbourne's Intercolonial Exhibition in 1866. While the jurors singled out von Guerard's painting for comment, declaring it „most remarkable” as „an accurate topographic portrait”, this assessment was inherently dismissive because topographic recording did not rank as art.

This decline in his work after 1863 may have been that of an artist who had lost the excitement of painting a new landscape and picturing places that had never been rendered as canvases before.

It could be that, approaching his mid-50s, von Guerard was not the painter he had been. But one may also wonder about the extent to which his decline was a result of the reception of Mount Kosciusko: what was it like for him to have stretched his art like never before, and painted such a personal, powerful picture only for his new society to reject it time and again?

_See also _ interesting notice in the „Age” of the 1982 about painting competition on Mt Kosciuszko.