An explorer and geologist:
„He went where no roads went”

Praise in to a great pole Paul Edmund Strzelecki

DOWN in the Snowy Mountains there's a landmark monument that should be better known by all Novocastrians (a native or resident of Newcastle, New South Wales, or Newcastle upon Tyne ).
It's a giant nine-metre tall memorial to Sir Paul Edmund de Strzelecki, the renowned Polish explorer, geologist, scientist and surveyor. 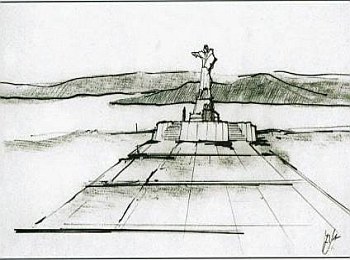 Since 1988, his four-metre tall bronze statue has stood down south atop a five-metre high plinth of imported Polish granite.[*](additional info - granite for the pedestal of the monument came from Poland - the statue itself and the four bronze plaques were also made in Poland. The platform on which the monument stands was made in Australia. Elements of the monument were transported from Poland by ship to Australia and the monument was unveiled on November 14, 1988 - Z. L.)
The prominent memorial stands on the picturesque foreshore at Lake Jindabyne, in Kosciuszko National Park, the gateway to the Snowy Mountains.
The statue's back is to the lake, with his sightless eyes staring into the far distance. In one arm he holds notes and maps while his other outstretched arm points to Mount Kosciuszko which he once climbed and named.

Count Paweł (Paul) Strzelecki (1797-1873) was what we'd call today a high achiever, an intriguing man whose name, I suspect, is still unfamiliar to most Australians although he remains a legend to Poles everywhere.
But the deeds of this scientist speak for themselves. Why else would 16 places nation-wide, including Newcastle, bear the name Strzelecki?

Fellow explorer Charles Sturt named the Strzelecki Desert in Central Australia after the trailblazer. The almost 500km long Strzelecki Track in South Australia also commemorates him.
But who would imagine the Polish geologist also had a major role in helping foster the coal industry in Newcastle? Why else is there now a memorial to him on The Hill in Newcastle, now famous as Strzelecki Scenic Lookout, in the carpark near the start of the Anzac Memorial Walk?

Complex and ambitious, Strzelecki had a great gift for friendship during his world travels, but forever held a grudge if he thought he had been wronged. Perhaps a gradual resentment against an unfair world made him leave a will in 1873 ordering his papers be destroyed and his body be buried in an unmarked English grave.
Despite his wishes, more than a century later his body was moved to Poland to rest in a place called the Crypt of Eminent Poles. [*] [in Crypt of Meritorious Citizens Greater-Poland (Krypta Zasłużonych Wielkopolan) beneath the church of St. Adalbert, in the old city section in Poznań.(Z. L.) ]

The imposing bronze statue of Strzelecki by Lake Jindabyne was given by the Polish People's Republic as a gift to mark Australia's bicentenary in 1988 as the explorer was a heroic figure in the history of both nations.
While exploring the Snowy Mountains region he was the first westerner to climb and name Mount Kosciuszko after Polish freedom fighter and patriot Tadeusz Kosciuszko.
Strzelecki came to Australia in 1839 on a minerals-seeking mission, locating gold and silver in NSW and later coal deposits in Van Diemen's Land (Tasmania).

Newcastle's often overlooked Strzelecki's black marble monument at Shepherds Hill was sponsored by the Newcastle Polish Community in 1991. It's in recognition of the great Polish explorer's research into our coal deposits between 1839-1845 which „influenced the development of the Newcastle district”.

Former long-time Newcastle Lord Mayor Ald John McNaughton, himself a surveyor, helped with the idea and remembers it well.
„The reason for the monument was to mark Poland being liberated after years under the Communist regime. Jan and Anna Slusarczyk promoted the project,” McNaughton says „Strzelecki was a remarkable man. He did major explorations, named Mt Kosciuszko and moved all over the place. After Newcastle he went to Hobart.” 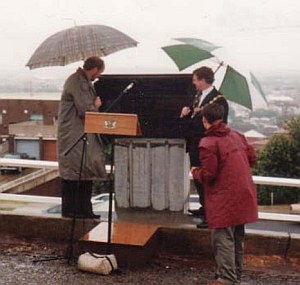 The moment of unveiling plaque ⇒⇑

McNaughton, who says he was well tutored by the Polish community to pronounce Strzelecki instead as „Stseletski”, was impressed by the explorer's diagram of early Newcastle. „He must have drawn the mining map from out at sea. The interesting thing is that initially no one knew of this first geological map of the Hunter coal measures.”

McNaughton says it was „lost” until around 1990 when re-discovered possibly in the British Museum.
„The Newcastle papers were no-where to be found, yet Strzelecki had been so meticulous. There was a real gap. The explorer had once been living in Tasmania and it seems his Hunter papers had been mistakenly then catalogued as Tasmanian” McNaughton says.

Also as surprising as the Newcastle monument's existence is that there is a second Hunter monument to the Polish geologist who once zig-zagged all over then southern colonial NSW.
„This second memorial, to Strzelecki, a stone plinth, is in the East Maitland Park off the New England Highway, near the statue of boxer Les Darcy,” Newcastle history sleuth Suzanne Martin revealed
„What's more, explorer Strzelecki was the person who named Gippsland, in present rural Victoria. The region was named after the then NSW Governor George Gipps, his expedition sponsor.”
Martin says she also learned Strzelecki almost lost his life, bravely staying among typhus victims while saving Irish children during the Irish Great Potato Famine of the 1840s.
Of lasting significance was Strzelecki's publication in 1845 of his book Physical Description of NSW and Van Diemen's Land which was praised by Britain's Royal Geographic Society.

The best thumbnail sketch of the Polish explorer might be by University of Wollongong lecturer Michael Organ who delivered a paper at the recent Strzelecki Omeo Festival celebrating the 180th anniversary of the naming of Mt Kosciuszko and exploration of Gippsland.
„He went where no roads went. He was a bon vivant and socially adept with formidable diplomatic skills” Organ says.

Exploring Australia between 1839 and 1843 from the Hunter to the Southern Alps, the pioneering scientist walked more than 7000 miles.
Between 1846-48 he was appointed as British emissary to co-ordinate the relief effort during Ireland's catastrophic potato famine.
Through his intervention, Strzelecki saved 200,000 Irish children from starvation.

He was later knighted by Queen Victoria for his efforts and his contribution to science.

„[But] in many ways he was an enigma, a man of mystery. He was a big, strong man with an active interest in geology, geography and the physical environment around him … diligently collecting fossils, rock and mineral specimens, recording the local flora and fauna, recording temperature and weather conditions and providing details of the culture and traditions of Aboriginals which at the time was being largely neglected,” Organ says.

„A pioneering scientist, explorer and humanitarian, he can rightly stand alongside Kosciuszko within his homeland and especially in Australia as a Pole of distinction.”

[*] Additional information and explanation from the our (Z. L.) webmaster |  _Back to top_