The suggestion emanating from Tumbarumba Shire to again change the name of Mount Kosciusko is an unhappy one. It may be a thought by some as being an act of „reconciliation” to the original inhabitants of our continent, but there is no merit in it. 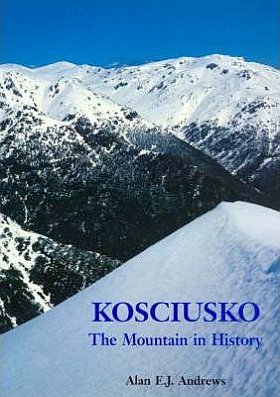 A name was given to our highest mountain on the occasion when that fact was realized. To change that name to some meaningless sound, albeit Aboriginal, would achieve nothing. Historic names - the names of our heritage - should not be changed. In the case of Mount Kosciusko, which recently has been given a Polish spelling by the New South Wales Government, there are many reasons, additional to that obvious one, why abandoning Strzelecki’s naming should not be permitted.
Additional explanations - see below on this site.

Sir Paul Edmund de Strzelecki detected, climbed, and named our highest mountain, as most Australians know. Strzelecki and James McArthur ascended this mountain massif together. Strzelecki considered it to be the highest part of Australia, a fact unknown at the time. He climbed to its highest point and gave a name in keeping with this concept.

It does not lessen the value of Aboriginal culture to point out the fact that the concept of there being a highest point of land in a continent was foreign to Aborigines. It could not have been otherwise, for this is a relatively modern concept and dependent upon the growth of European culture and the knowledge gained by European exploration.

The highest mountain of a continent is a grand concept, and Strzelecki considered that such a mountain should have a grand name. No greater name - in his estimation - was there than that of Thaddeus Kosciuszko - the name known in the British Isles, America, and Australia in its English version Thaddeus Kosciusko.

Kosciuszko was a freedom fighter of great renown, and not revered just for his efforts in trying to free Poland. He was honoured by the great and the ordinary, by peasants and poets alike - in the latter category Byron and Leigh Hunt come to mind.

When General Kosciuszko „fell” and was taken prisoner at Maciejowice the Scottish poet Thomas Campbell in poem „Battle of Warsaw” commemorated the event in these stirring words: ⇒ →

- Read also below - ⇓
In vain, alas! In vain, ye gallant few! Flank rank to rank your volleyed thunder flew:
Oh! bloodiest picture in the book of Time, Sarmatia fell, unwept, without a crime;
Found not a generous friend, a pitying foe,
Strength in her arms, nor mercy in her wo!
Droppd's from her nerveless grasp the shatter'd spear,
Clos'd her bright eye, and curb'd her high career;
Hope, for a season, bade the world farewell,
And Freedom shriek'd as KOSCIUSKO fell!

Later, in America, it was from Colonel-Engineer Kosciuszko’s fortifications that Washington in the American Revolution crossed the Delaware and saved the Revolution. Kosciuszko is important for many reasons, not least the one being that „he stood all his life for individual freedom as well as national, for the right of man to his soul.”

„Kosciuszko regarded slavery as the darkest blot on the escutcheon of a free America. The toleration of bondage violated his concept of America as the land of the free and equal. Sixty-three years before the Civil War [that is in 1798] Kosciuszko initiated procedures to abolish slavery in the United States.”

Strzelecki, himself, stated in his report concerning the naming of Mount Kosciusko:

(…)
that, although in a foreign country, on foreign ground, but amongst a free people, who appreciate freedom and its votaries, I could not refrain from giving it the name of Mt Kosciusko.

He explained it in similar terms, in his letter (in French) to Adyna Turno in Poland, that he gave the name -

(…)
„to remind and hand down on this new continent the name dear and sacred to all Poles; to all people friends of liberty and honour; today this culminating point of New South Wales is called Mt Kosciuszko and it is unnecessary to tell you that upon publication of the maps of Gippsland everybody has commended that name.”

Even if Thaddeus Kosciuszko were not so important and praiseworthy, the fact that the name for the discovered mountain was bestowed by Sir Paul Edmund de Strzelecki in itself deserves that the naming not be interfered with. For Strzelecki was a man deserving of praise. A scientist, world traveller, explorer, and a gentleman whose efforts profited every place he visited.
He spent a number of years in Australia, covering much ground and contributing greatly.
A man of great energy and capacity for thought and action, honoured by all who made contact with him - and not just because he happened to be a nobleman, but because of those actions. He was a man of whom we can be justly proud. Lech Paszkowski’s book, mentioned previously, tells us (without bias) all about him. There are scores of books to tell us about Thaddeus Kosciuszko.

Our highest mountain is tied to these two important figures of the eighteenth and nineteenth centuries and it is tied to Freedom. It is not tied to any Aboriginal connection. As one of many peaks between the headwaters of the Murrumbidgee and the Murray it no doubt provided a source of food to its summer visitors. Probably all the names associated with these peaks refer to that source of food - the Bogong moth.
Here are some of those words that appear or have appeared on our maps - one sound obviously was hard to differentiate between a „J”, a „T” and a „D”:

There are several native Aboriginal (Ngarigo) names associated with Mt Townsend, where J. Macarthur recorded in 1840 some campings of the natives.

Certainly there is no Aboriginal name associated with our highest peak, despite that Spencer of Waste Point may have claimed that our Mt Townsend could have been associated with the Targangil sound. Back in the second half of the eighteenth century Spencer used to claim this peak was Mt Kosciusko when it suited him.

Mount Townsend is our second-highest mountain, and thoughts should not be turned to changing its name either. Surveyor Thomas Scott Townsend was a most important man in our Snowy Mountains heritage. If you want to know about him you can ask me.

It must be said again that historic names should not be tampered with; they are an entity in themselves. It is bad enough changing the given spelling, but to abandon a heritage name in order to replace it by a made-up one because of a whim or for some political or social agenda is culpable.

Published in the KHA Newsletter No: 108 Winter 2000 Letters to The Editor.

In 2019, „Kunama Namadgi” was submitted to the Geographical Names Board of New South Wales as a proposed dual name for Mount Kosciuszko.
The proposal was submitted by the Toomaroombah Kunama Namadgi Indigenous Corporation, which states that the proposed name means "snow" and "mountain".

According to Uncle John Casey, the mountain's Ngarigo name has „been Kunama Namadgi for 4,000 years, since we've been on country, until the white man came in the early 1800s and that's when they changed it”.

However, Ngarigo woman Iris White - the chairperson of the Southern Kosciuszko Executive Advisory Committee, disputed that account, stating „that name is not from our language.
It's offensive because in some of our languages 'Kunama' actually means faeces”.
White said that a new name should not be given „just for the sake of it sounding Aboriginal or sounding good”.