HE MIGHT have spent only two years in Tasmania but Count Strzelecki's achievements can still be seen today.

Bringing together people since 1988 with an interest in history

In Launceston he initially stayed with Dr Pugh, using his laboratory to analyse coal and soil samples. He later stayed in Government Cottage in City Park.
An article was published in The Examiner on Monday, 20 July 2015. page 8: with the title „Strzelecki achievements revealed”
Also listen to John chatting with Belinda King on ABC local radio on Tuesday 21 July (2015) at 7.35am

We thank you very much Catherine Pearce - Librarian Launceston LINC
- for sharing this article.

He might have spent only two years in Tasmania but Count Strzelecki's achievements can still be seen today.
Born in Poland in the late 1700s, Pawel Strzelecki travelled the world for five years before he arrived in Sydney in the 1830s. 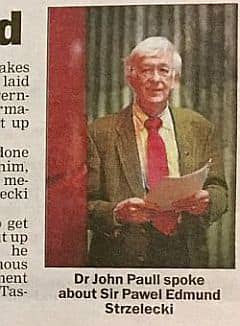 Celebrated with an Order of the Bath from Queen Victoria and a gold medal from the Royal Geographical Society, Count Strzelecki's Australian achievements included being the first European to climb and name Mount Kosciuszko.

University of Tasmania research associate and guest speaker John Paull held a forum on Count Strzelecki at Launceston's Queen Victoria Museum and Art Gallery on Sunday.
„Strzelecki was born in Poland to a noble family, his early life is a bit of a mystery,” Dr Paull said:

„He learnt meteorology, he learnt navigation and all sorts of other skills that were useful to him.”
„He walked 2000 miles around Tasmania and in 1845 he wrote a 450-page report on his explorations in New South Wales and Tasmania.”

Researching the potential for irrigation in Tasmania in the 1800s, Dr Paull said Count Strzelecki's findings are still influencing the state today and that he should be recognised for his achievements.

We haven't done enough to recognise him, there is no statue or memorial plaque of Strzelecki in Tasmania.
» I think we ought to get our act together and put up a memorial because he contributed an enormous amount to the development and exploration of Tasmania « ”

Published in „The Examiner” on Monday, 20 July 2015
(We have an electronic version of the article)