THE unveiling on the submit of Mount Kosciuszko this year of a tablet commemorating the first ascent of the Australian Alps 100 years ago by the Polish explorer, Count Paul Strzelecki, revives interest in an old mystery. Did Strzelecki climb Kosciuszko, Australian's highest mountain, or the adjacent, but slightly lower, peak of Mount Townsend?
Situated close to the trig on Kosciusko's summit, the tablet and the cemented atone base to which it is affixed were erected at a cost of more than ₤100, raised largely by the donations of skiers, mountain-lovers and residents of Cooma and Jindabyne.
Several pounds were contributed by mountain shepherds, many of whom rode from the head waters of the Murray to attend the ceremony.
Considerable care was taken, when choosing the might not be capable of substantiation.
Thus the assertion is made not that Strzelecki climbed Kosciusko, but that …

From the Valley of the Murray River
The Polish Explorer Paul Edmund Strzelecki
Ascended these Australian Alps on the 15 th February, 1840.

The distinction is significant in view of the controversy, now a century old and still undetermined, that has raged over the precise limits of Strzelecki's accomplishment - in any case a redoubtable achievement considering that the region in which he was travelling was trackless and unexplored, that his party had no fixed base from which to operate and that Strzelecki himself made the ascent of the Great Driving Range on foot with his surveying and meteorological instruments strapped to his back.

It is of prime importance, in endeavouring to follow Strzelecki's footsteps in the Alps, to remember what the explorer himself said about the exploit in the report which he made when he reached Melbourne three months latter:

— „I followed the windings of that valley [the Murray] for about 70 miles to the foot of the highest protuberance of the Australian Alps, which it was my object to ascend and examine. The steepens of the numberless ridges, intersected by gullies ad torrents rendered this ascent a matter of no small difficulty, which was not a little increased by the weight of the instruments, which for safety I carried on my back.
Once on the crest of the range, the remainder of the ascent to its highest pinnacle was accomplished with comparative ease.

On the 15th February, about noon, I found himself on an elevation of 6.510 feet above the level of the sea, seated on perpetual snow, a lucid sky above me, and below, an uninterrupted view over more than 7,000 square miles.
This pinnacle, rocky and naked, predominant view several others, elevations of the same mountains, was and always will be, chosen for an important point of trigonometrical survey; clear and standing by itself, it affords a most advantageous position for overlooking the intricacies of the mountain country around.

The eye wanders to the Three Brothers, or Tintern, thence to the sources of the Dumut and the Murrumbridge, discovers with ease the windings of the Murrray, the course of the dividing range, the summits of Mounts Abberdeen and Buller, and is seduced even beyond the limits of a survey.
The particular configuration of this eminence struck me so forcibly, by the similarity it bears to a tumulus elevated in Krakow over the tomb of the patriot Kosciusko, than although in foreign country, on foreign ground, but amongst a free people, who appreciate freedom and its votaries. I cloud not refrain from giving it the name of Mount Kosciusko.”

Strzelecki, of course, was well out in his calculation of the height of his „highest protuberance”.
The height of Kosciusko, corrected in 1924, is now given officially as 7,305 ft. and Mount Townsend as 7,238ft. 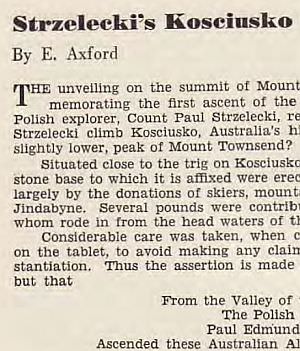 At least two interesting considerations arise from a reading of these graphic and emotionally stirring words. Firstly, the phase „rocky pinnacle” scarcely fits the rounded turf-covered summit of Kosciusko, though it does describe the summit of Townsend. Secondly, it would appear, from the route Strzelecki must have followed, that during the whole of the ascent the summit of Kosciusko would be hidden from view, making him imagine Townsend to be his goal.
[Can the eye „discover with ease the windings of the Murray” from Kosciusko?. - Editor.]
It must also be remembered that the difference between the heights of the two peaks is only 67ft.

On the other hand, is it necessary to suppose that a scientist of Strzelecki's eminence would be incapable of detecting these material differences in elevation?
In an extremely thorough and minutely-documented paper which was read before the Royal Australian Historical Society on November 28, 1939, and which has since been printed, Mr. W.L. Havard, of Sydney, emphasises the great care taken by the Polish explorer in his determinations.
For example, his calculation of the height of Mount Wellington, Tasmania, differed by only 29 ft. from to official height officially given to-day. Nevertheless, as Mr. Havard is careful to point out, Strzelecki's instruments afterwards purchased by the New South Wales Government, „were found very faulty”.

Yet who is to refute Strzelecki's oft-repeated assertions …

and again, in a letter:

„Here is a flower from Mount Kosciusko the highest peak of the continent?”

Unfortunately, Strzelecki did not build a cairn on his mountain peak, nor did he leave any other record of his presence there, otherwise the subsequent controversy over his claim would never have arisen.

The strangest part of the story, however, was what took place 30 years after-wards. About 1870 the Survey Department of Victoria made a triangulation of these mountains and, on the maps subsequently printed, attached the name „Mount Kosciusko (Ramshed)” to the peak we now call Mount Townsend.
Then, 15 years later still (1855), the scientist, Dr R. von Lendenfeld, announced to the world that this peak (our Townsend), which he called Mueller's peak, was not the highest in Australia, but that the honour should be given to another peak (Kosciusko), which he named Mount Townsend after Government surveyor. Lendenfeld's report is still quoted as evidence of Strzelecki's supported mistake.

For the refutation of Lendenfeld's claims, and the final clearing up of a centaury-old mystery, were are indebted to the recent painstaking researches of Mr. B. T. Dowd, of the lands Department, New South Wales, which have gone far to elucidate what he aptly describes as a „cartographical tangle”.

Mr. Dowd in an extremely valuable addendum to Mr. Havard's paper on Strzelecki, says that a copy of the polish explorer's original route plan (it is in the possession of the lands Department and is reproduced on p.38) makes it impossible to ascertain with certainty the exact peak climbed by Strzelecki, as the route line marked by the explorer stops at what appears to be the foot of the mountains.

There is, however, in the archives of the Department the first official plan of the Country of Selwyn (1851) drawn and signed by the New South Wales Government surveyor, Thomas Townsend, after his ascent of both Kosciusko and Townsend in 1846-47, five years after Strzelecki.

[ There seems, however, to be no evidence that Townsend hat any information, written or verbal, from Strzelecki, which would enable him in 1846 to pick Strzelecki's Kosciusko with any more certainty than ourselves. - Editor ]