Strzelecki who ascended the summit in 1842, was struck by the view from near Mt Townsend of the Murray River gorge; he wrote:

From the Great Famine in Ireland reports

„ While hundreds of thousands were deprived of food ad health by the failure of the potatoe crop, about 90,000 holders of lands 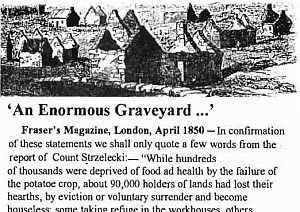 had lost their hearths, by eviction or voluntary surrender and become houseless; some taking refuge in the workhouses, others,dreading domestic separation, availing themselves of the out-of-door relief only, and this in a state of emaciation, nudity and sickness, hardly credible; crowding together and crouching under heaps of rotten straw from their unroofed cabins, under bridges, burrowing on the road side, or in ditches of the cold and wet bogs. Perishing from want of food, unfortunately was the lot of many.”

The diligence of the Irish despite defeat the Great Famine.

… „ in no colony will a settler meet with cheaper labour, or with a more willing, tractable, and docile race, when justly treated, than the Irish peasantry.
Already some pioneers, whose farms I have visited in Mayo and Galway, have converted, within a year, waste lands into fields of the finest white and grain crops, and have every reason to congratulate themselves on the hearty Irish welcome they have received from all classes.”

A few remarks of Count Strzelecki from the report on Ireland Great Famine.
Content from „Fraser’s Magazine” London, April 1850.

Strzelecki considered that geology provided a way a determining the future use of areas as soil type was an indication of fertility. He wrote:

From what has been said, it follows that the soils of the two colonies consist of two distinct classes, within which all the minor varieties may be included: the first, impoverished by denudation, and which yields only pasture for grazing; the last, enriched by the drift, presenting every inducement for agriculture.*

He also noted that the improvement in agriculture:

The era is grand, and unparalleled in British history! The highest nobility lead the way to a new national glory – the glory of the perfection of agriculture! The Dukes of Richmond, Rutland, Portland, Buccleugh, and Sutherland, Lords Spencer, Ducie, and Aberdeen, Sir Robert Peel, &c. &c., are at the head of at the movement, and identifying themselves with that noble profession, „ upon which the welfare and development of the whole human species, the richness of states, and all commerce, depends” * * 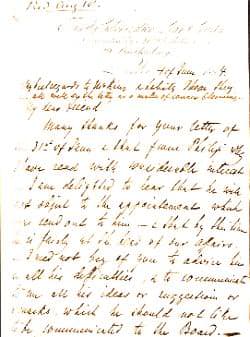 In this letter, Strzelecki expresses his outrage at having been made to remain silent about his discovery of gold.
Above - Sir Paul Edmund Strzelecki letter to Phillip Parker King, 4 June 1854.

I was frightened by Sir George Gipps, & was gagged without being bribed. But my papers and the Memorandum of Sir George Gipps must be in the records of the Colonial Despatches - who knew all about but remained silent!

Count Strezlecki (its original spelling), now in London, has just written to friend in Australia to say:

Upon referring to the section of the country lying between Macquarie Harbour and Launceston, it will be observed that the Cap itself is quartz, bounded by mica slate turned on its edge, followed by a section of pebbles, and there again, edged by mica slate, upturned and backed by quartz rock.
The geological characteristics of that part of the island are identical with those belonging to the gold fields of the Australian continent.

„ … between Sydney and the „Dividing Range”, in the direction of Bathurst, and in the width of sixty miles, there are no metals except iron
… carburet of iron (black lead), and plenty of coal. Not far from Mount Hay there is a thermal spring of chalybeate water, strongly impregnated with carbonic acid – most beneficial to health impaired by dyspepsia or nervous affection, but, as fate would have it, threatening to kill by the exhausting fatigue of the journey whomsoever should attempt to get at it.

On this side of the Dividing Range the variety of rocks and embedded minerals augment – indications most positive of the existing silver and gold veins are met with. The want of means, however – that is, time and men – did not allow me to trace them to their proper sources.
Why has the Government not sent heretofore a man of science and mineralogical and mining acquirements to lay open these sources of wealth still hidden beneath, and which may prove as beneficial to the State and individuals as the rest of the branches of colonial industry?”

About crater of Kilauea (Halema'uma'u), Hawaii

The first published use of the name Halemaumau was in the form „Han-man-man” and appeared in the „Hawaiian Spectator” for October 1838. It was recorded by a Polish traveller, Count Strzelecki as name for the lake of molten lava in Kilauea.

„What I remember, and long shall recollect, as showing the mighty influence of mighty objects upon me, are the difficulties I had to struggle with before my eye could be torn away from the idle, vacant, but ecstatic gazing with which I regarded the great WHOLE, down to the analytical part of the wondrous and unparalleled scene before me; I say unparalleled, because, having visited most of the European and American volcanoes, I find the greatest of them inferior to Kilauea in intensity, grandeur, and extent or area.”

Amidst the wrecks of schemes, efforts, and attempts to Christianize, civilize, utilize, and preserve the aboriginal race, there remains yet to be adopted one measure, worthy of the liberality of the English Government, viz., to listen and attend to the last wishes of the departed, and to the voice of the remaining few:
- „eave us to our habits and customs; do not embitter the days which are in store for us, by constraining us to obey yours; nor reproach us with apathy to that civilization which is not destined for us; and if you can still be generous to the conquered, relieve the hunger which drives us in despair to slaughter your flocks and the men who guard them.
Our fields and forests, which once furnished us with abundance of vegetable and animal food, now yield us no more; they and their produce are yours. You prosper on our native soil, and we are famishing!”
( … )
Other races, like true children of the soil, indentify themselves with it, draw it their sustenance, their power, and their nationality; call it country; love and cherish it as such and cling to is bosom, though at the cost of freedom, of comfort, of property, and even of live.
Banished from it, they become but lost wanderers, and soon degenerate; like the alpine rose, which when transplanted even to more genial regions loses its blossoms, and sends forth only thorns.

file)
Use this link if not already _installed_ Adobe Acrobat yet

The hardy nature of the Anglo-Saxon race is proof against the effects of transplantation: for it does not depend on the soil either for its character or its
nationality:
( … )
The Anglo-Saxon reproduces his country wherever he hoists his country’s flag.
The United Kingdom is far from furnishing a just idea of this race
( … )
It is in the United States, in the West Indies … and in this town of Sydney, that the prodigious expansion of the Anglo-Saxon life, the gigantic dimensions of its stature and the energy of its functions, are fully perceived and appreciated.

Quote from His book „Physical Description of New South …”, 1845.