from the Protestant Patrons of the Skibbereen Union
for Supplying School Children with Food.

H AVING experienced the bounty of the British Association in supplying the children of our Schools with food, by which they are not only in a healthy but in a very thriving condition, and as (unhappily, we fear) its funds are exhausted, and it will therefore no longer be able to act by on the generous part it has no long done, we, the Protestant Patrons of the Schools so assisted, cannot suffer the opportunity to pass (while we lament the cessation of its needful assistance at this time) of thanking its Members most cordially, and the British Public through them, for the salutary and extensive aid we have hereby received.

If any circumstance could increase our gratitude, it is the judicious mode selected for bestowing it, and for which, as we are informed the Associationis indebted to you, 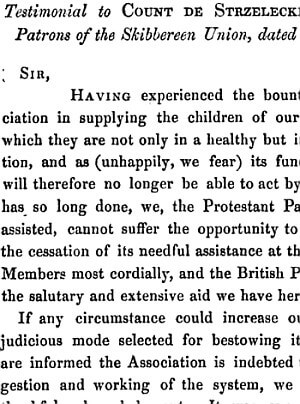 Sir, for the suggestion and working of the system, we beg to render you our thankful acknowledgment.
It was one of the most judicious methods that could be thought of for affording us the assistance we required, as (carried out in the spirit of the intention) it was a means of correcting the degraded habits engendered by gratuitous feeding in the rising generation, teaching them, while improving their minds and principles, to know the scripturalrule, that „if man will not work, neither should he eat”.

It was calculated to raise them into a comparative state of respectability, when it could be said by them in a sense, that they had earned what they ate.

Blessing God for putting it into the hearts of those who supplied your Association with the means, and for suggesting, through you, the excellent mode of dispensing the funds entrusted to its care, we implore the Divine mercy to give to you all the full satisfaction of those benevolent minds who feel the highest gratification in being useful to their fellow-creatures.

Here you will find _a further list_ with co-signatures.

Extract from an Address presented to CAPT. H. W. GORDON, 59th Regiment, by the Inhabitants of the Bantry Union, dated 1st September, 1848.

We shall be much obliged by your expressing to the British Association how deeply we feel for their munificent and timely aid, by which the lives of no many of our population have been preserved.