„Snowy - The Making of Modern Australia”  excerpt
by Brad Collis

In the summer of 1839-40, drought was much on the mind of a prominent sheep grazier, James Macarthur, son of Australian wool industry pioneer, Captain John Macarthur.
He had put five-hundred pounds into an expedition to find new country for the Merino ﬂock the family was building at Camden, near Sydney.
For the moment, on 11 March. 1840, James Macarthur was simply a worried and mildly annoyed man.

Worried by the debilitating effects of a land which was always parched; and frustrated at finding himself edging painfully up the side of a mountain following two Aboriginal guides and a bobbing backpack strapped to the broad shoulders of a wandering Pole, Paul Strzelecki.

Macarthur was impatient to find new pastures, not conquer mountains.
As he followed the Pole's measured steps through thick scrub and up steep faces he wondered, not for the first time, how he had allowed himself to he talked into leaving the main party in the Upper Murray Valley for this unplanned excursion to the topmost peaks of the Australian Alps. His only interest was his flocks which were multiplying too fast for the availahle pasture 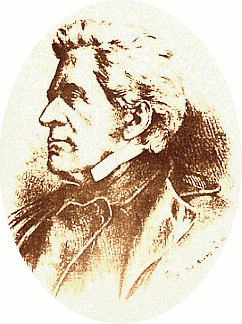 But he had been lured, „by the ardour of discovery to ascend the highest known peak in Australia” … and was now regretting it.
The weather was very hot, time was short.

After five hours climbing from dawn on the second day they came to a natural clearing, a camping ground used by Aborigines during their annual feast on the Bogong Moth.
From here the two Europeans continued on alone until they reached a plateau covered with alpine plants and a boggy marsh - the source of the many streams that fed the rivers which emerged from the alpine plains.

The bog was (and still is) a sphagnum moss community containing many primitive alpine plant species from the last Ice Age.
The men then struck south for several kilometres until Strzelecki stopped, lowered his pack of instruments to the ground. Using his instruments, Strzelecki determined that a rounded cone of bare granite about five kilometres away on the other side of a ravine was the highest.

He pointed:
„That is the highest … most likely the highest point of the continent. It reminds me of the tumulus over the tomb of my countryman, Tadeusz Kosciuszko, in Krakow.
He fought and died for Poland's freedom, therefore I name this Kosciuszko because here in this foreign country I am among free people.”

They were prophetic words, though little could he know that just over a century later thousands of his compatriots would come to know these mountains and express the same heartfelt sentiment.

On his return from the expedition, he wrote to his sweetheart in Poland, Aleksandryna Turno: (see box below)

„ Here is a flower from Mount Kosciuszko -- the first in the new world bearing a Polish name. I believe that you will be the first Polish woman to have a flower from that mountain …
the highest peak of the Australian Alps. It towers over the entire continent, which before my coming, had not been summounted by anyone.
With its everlasting snows, the silence and dignity with which it is surrounded, I have reserved and consecrated it as a reminder for future generations upon this continent of a name dear and hallowed to every Pole, to every human, to every friend of freedom and honour -- Kosciuszko.”

The Snowy Mountains have an ancient history, both in geological and human terms.

Four hundred million years ago the Kosciusko region was a deep marine basin near the edge of a continent and prone to submarine volcanoes. Later, about three hundred and fifty million years ago, the area had risen above the ocean.

Although the terrain was volcanic the mountains are believed to have been pushed up as fold mountains when Australia and New Zealand geologically separated.

During the next two hundred and fifty to three hundred million years the region was gradually eroded, with the more resilient rock types forming the mountain ranges which have remained much the same for the past sixty million years to the present.

The first known animal life in the mountains is comparitively recent - just thirty thousand years ago, around the start of the last Ice Age. The Snowy Mountains about then, became a haven for giant marsupials, including the giant kangaroo which stood up to three metres tall, also the Tasmanian Devil and Tasmanian Tiger.

Humans first moved into the mountains about twenty thousand years ago.
In one cave, Cloggs Cave, near the Buchan River in south-eastern Victoria, archeologist Dr Josephine Flood, has traced seventeen thousand years of almost constant occupancy, right up to the 1830's and 1860's when the Aborigines in the region were anihilated by measles and smallpox brought by the white settlers.

In a wild gorge of the Snowy River north of Buchan are examples of Aboriginal cave art dating back twenty thousand years - older than the famous paintings of the Lascaux bison hunters in southern France and Spain.

The mountains took on great importance for Aborigines throughout south-eastern Australia at the end of the Ice Age when the climate had warmed sufficiently for Bogong moths to discover the coolest place to survive the summer months was in alpine crevices. 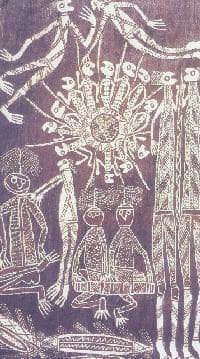 Tribes from the coast, the south and the western plains pursued the moth - it being both a delicacy and a food for survival, particularly when the land below the mountains was seared by the hot, dry summer.
It was an annual event in the natural cycle which governed the tribes' rituals.
The profusion of the moth supply was able to sustain large tribal gatherings for the necessary social convergence for marriages, gifting ceremonies, initiations and corroborees.

The Snowy Mountains played a profound spiritual and material role in the lives of Aborigines in the continent's south-eastern region. By the time Europeans arrived to clear the land for settlement, the Aborigines were among the last of humanity still able to shelter in the spiritual anchorage of a pristine land.

The name „Bogong” bestowed on the peaks by the great tribes which populated the plains surrounding the Alps, was already old when the Achaeans were sacking Troy and ancient by the time Boadicea was attempting to drive the Romans from Britain.
In the timelessness of the Aboriginal land, spring in the Alps was heralded not by calendars but by the radiant blooming of wildflowers; starting on the lower slopes with fields of black-eyed Susan, lilac hovea and purple sasparilla which appeared like a colourful net cast over humps on the landscape caused by fallen trees and large boulders rounded smooth by eons of abrasion by Ice-Age glaciers.

Today still, as the season progresses and the mountains warm, this many-hued migration moves up the slopes until the summits and rolling alpine plains are seas of snow daisies, marigolds, everlastings, blue bells, heath and a profusion of herbs. On the high plateaus sphagnum moss bogs protect primitive alpine plants.
With this flowering wonder arrive ravens and kestrels, hovering beneath the high, bright sun like ghostly apparitions in a glassy sea. Packed in the rocks below, are the Bogong moths.

Over thousands of years of summer trekking the Aborigines wove the moths and the mountains into their Dreaming, creating great ceremonies. According to custom, it was only men who collected the moths, in „nets” made of fibre from the Pimelea shrub or Kurrajong tree.
When filled, they were carried down to camps on the lower slopes where women cooked the moths in prepared hollows of hot ash - or roasted on flat rocks heated by hot fires of dry grass and leaves.
Alternatively, they were ground into a paste and baked into patties.

At night, men danced around fires, to a tempo set by lubras beating drums of hide stretched over curled bark, held firm inside by stick ribs. They beat the drums with nulla-nullas (clubs of wood or bone) and chanted; their plaintive lullabyes drifting over the mountains and deep into the valleys. Some women played reeds with fingers and lips, extracting an eerie buzzing sound.
Around them the night itself joined in celebration, dancing with the shadows cast from the firelight.

But by the time of the Snowy, the Aborigines now were long gone. They had been annihilated by venereal disease, measles and smallpox brought by settlers and by the European obsession with ownership and money - or more directly, the weaponry and legal system used to protect such attainments.
The Aborigines' bond with both the earth and the heavens transcended the understanding of the white arrivals as much then as it does today.

The Snowy Mountains are like no other on Earth and not only because of the moths and the spells of an ancient Dreamtime. Nowhere else do Eucalypts grow in the snow, with the genus marking distinctly the snow line - above it, snow gums, stripped and twisted by blizzards that strike with terrifying ferocity; and below, tall straight woolybutts, elegant mountain ash, peppermint forests and towering ribbon gums, their shedded bark hanging in long sheets like dried vine curtains in a dessicated rain forest.